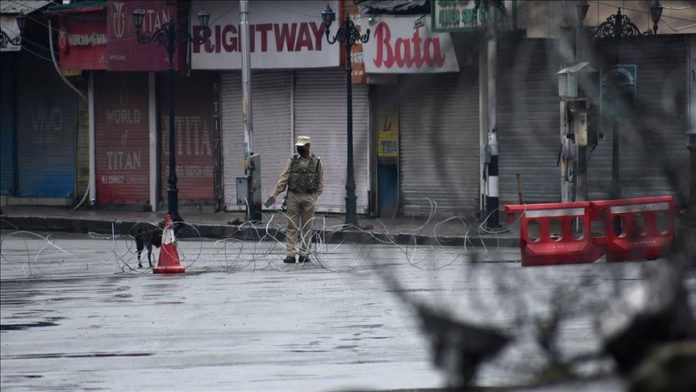 In yet another crackdown on Kashmiri social media users that critics say is aimed at silencing dissent, cyber police have questioned a few people, which led many others to deactivate their accounts.

Tahir Ashraf, the officer in charge of Cyber Police Station Kashmir, told Anadolu Agency that police questioned four to six users and 10 to 15 more have been identified for investigation.

“The investigation was started after some people complained that these users indulged in online bullying, threats and harassment in a coordinated manner,” Ashraf said, adding dozens of such complaints had been filed by online users.

Following investigations, many accounts disappeared, mostly from Twitter, but the police have collected screenshots as evidence to initiate an inquiry against the users. Ashraf said these people were operating social media accounts under different names.

A young man who had been called to a police station for questioning told Anadolu Agency on condition of anonymity that police asked him about his background, education, relatives and a lot of other details besides taking his photo. He said the investigators assured him that no case would be made against him if he gives up writing on social media.

He said most of his tweets were critical of the Indian state’s policies and he had never bullied or harassed anyone.

“What could one do in such a situation? You either give up or brace for a long and punishing police case. I have deactivated my account. Dissent has always been crushed here.”

Ashraf, however, said tweets of a political nature “do not amount to a crime” and the ongoing crackdown on these accounts was initiated after two months of surveillance.

According to internationally renowned human rights defender Khurram Parvez, social media users have largely been targeted for the political nature of their posts.

“How dissenters are hounded is complex. Some have only been questioned and let off. Some have been booked under stringent laws but not arrested. Police action is largely aimed at silencing Kashmiri resistance on all fronts,” he said.

“The police made an example out of some users on social media itself. This would have scared others,” he added.

Khurram referred to the case of two users who tweeted similarly-worded apologies on April 19 and 20.

“I am under Surveillance of cyber police station Srg. Kashmir. But I want to assure them that i will not upload any unlawful content on social media again and I will never misuse social media now,” read the tweets of @UmeeOfficial and @Kamranjourno.

These tweets were retweeted by Ashraf with salutary messages to both.

On India’s Independence Day, Ashraf was awarded the Police Medal for Gallantry. His colleague in civilian administration, Shahid Chouhdary, had hailed him as the man “behind the purification of social media.”

On April 11, Ashraf tweeted that he was having a meeting with an unnamed youth with the Twitter handle @MoosaKashmiri whose profile featured a photo of a scholar-turned militant, Dr. Manan Wani. The youth would openly support militants and pro-freedom politics in his tweets.

“After a detailed interaction over a cup of coffee, it seems that he came under peer influence n got carried away, which prompted him for mischief. He remained topper of his batch. I hope I’m successful in bringing him back to his studies. Wishing him all the best for his future,” Ashraf had tweeted. The @MoosaKashmiri handle disappeared after that.

Noted journalist and author Gowhar Geelani told Anadolu Agency that he has “been living a nightmare” since April 22, when he was charged under an anti-terror law with “indulging in unlawful activities through his posts and writings on social media platforms which are prejudicial to the national integrity, sovereignty and security of India.”

His case is being heard by the Jammu and Kashmir High Court.

“It has impacted my family and my writing. It has been perpetual mental harassment. Policemen here are free to write politically charged articles in the mainstream press, but journalists are being booked under anti-terror laws for opinions,” he said.

Gowhar said journalists and general social media users have been persecuted since 2017, when Jammu and Kashmir was still an autonomous state and had an elected government.

One such journalist is Zulkarnain Banday, who told Anadolu Agency that he was first questioned for about eight hours in October 2017 by counterinsurgency police at their headquarters on the outskirts of the capital Srinagar.

In July 2018, he had to fly on short notice to Srinagar from New Delhi, where he worked for an Indian newspaper, after being told that his brother had been detained in his place.

He said his brother was let off only after he reached the counterinsurgency headquarters, where several officers questioned him for the next five days. On the first day, he was detained at the headquarters.

“Much of the questioning was repetitive. They asked me to pull down my website, Lost Kashmiri History, in which I curated content related to Kashmiri history and the freedom struggle. They threatened me with preventive detention. They asked me about social media content, words I used, books I read, etcetera,” he said.

“Kashmiri voices are being silenced in a coordinated manner,” he said.

On Aug. 5, 2019, the Indian government revoked Article 370 and other related provisions from its Constitution, scrapping the country’s only Muslim-majority state of its autonomy. It was also split into two federally administered territories.

Simultaneously, it locked the region down, detaining thousands of people, imposing restrictions on movement and enforcing a communications blackout.