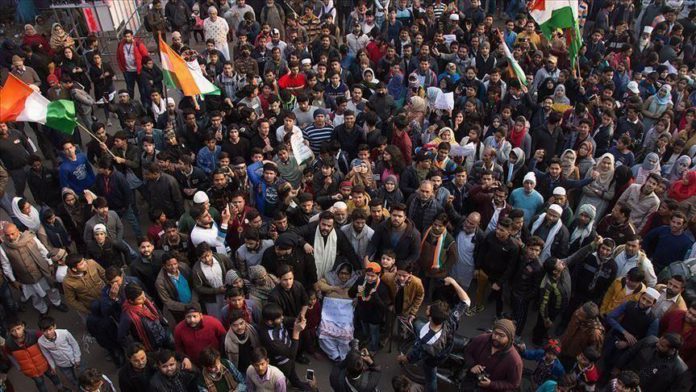 India has become an epicenter of Islamophobia in Asia, with reports of oppression committed against the large Muslim population pouring every day amid the coronavirus or COVID-19 pandemic.

Rising anti-Islamic rhetoric, hate crimes, violations of rights of Muslims, and blaming them for the spread of the pandemic and of late now the police action against students and activists who had participated in the peaceful demonstrations against the controversial citizenship law has raised serious questions on the democratic credentials of the country.

While countries worldwide are releasing prisoners intending to curb the spread of the virus, the Indian government under Prime Minister Narendra Modi has been on the spree of arresting activists and filling up the prisons.

According to India-based Newsclick website, soon after India enforced a lockdown since March 25 to stem the spread of COVID-19, Muslim journalists, activists, and students have been detained under the strict clauses of the Unlawful Activities Prevention Act (UAPA).

Those who have been detained include scholars and students like Safura Zarfar, Miran Haider, and Shifaur Rahman from Jamia Millia İslamia University (JMI), Umar Khalid and Sharjeel Imam from Jawaharlal Nehru University (JNU).

Police have charged them of making provocative speeches during the protests. Clauses like an attempt to murder, promoting hatred, and hatred among groups based on religion have been invoked against them.

Journalists in the disputed region of Jammu Kashmir are also facing a similar situation, charged under stringent clauses because of their social media posts and routine journalistic activities.

Zafarul Islam Khan, head of Delhi Minorities Commission, a quasi-judicial body, has also been booked under the UAPA. Delhi Police filed a case against him because he had thanked the Kuwait government via Twitter for speaking in favor of Indian Muslims.

In a statement released on May 6, Amnesty International called on the Indian government to immediately drop charges against Zargar, Haider, Rahman, and Khalid.

The global watchdog described these arrests as an attack on the freedom of speech. It has asked the Indian government to amend the stringent UAPA law to bring it at part with international human rights laws and standards.

Journalists in Kashmir under fire

In another statement on April 22, the world rights body said Indian police action against Kashmiri journalists was an attempt to block freedom of expression.The organization asked New Delhi to drop charges and free those who have been imprisoned for exercising their right to freedom of expression.

According to Indian news website thewire.in, while no action was taken against the ruling Bharatiya Janata Party (BJP) politicians Kapil Mishra, Paresh Verma, and central minister Anurag Thakur for issuing threats and indulging in hate speeches against Muslims, the police have been swopping on the victims.

There was even no action against Manish Sirohi, who had attacked the peaceful gathering of Muslims brandishing pistol. He was taken into custody, but released soon, implying that stringent laws are applied selectively and are meant only for Muslims.

According to a largely circulated Kolkata-based English newspaper The Telegraph, the anti-terrorism UAPA law gives extensive powers to security agencies. They can keep a person behind bars without filing charges up to 180 days and the defendants cannot be released on bail.

The use of the anti-terrorism law against students, activists, and journalists has stoked fears in civil society across India.

Using the meeting of a religious group Tablighi Jamaat, politicians and media launched a vitriolic attack against Muslims and blamed them for not observing social distancing and spreading the pandemic. At many places because of this campaign, Muslims were not bring allowed to enter into markets, pharmacies, hospitals, and residential localities.

Before the outbreak of COVID-19, Muslims and other civil society members had been agitating against the amendments brought in the citizenship law.

Under the law non-Muslim immigrants from Pakistan, Bangladesh, and Afghanistan who had arrived in India before Dec. 31, 2014, would be granted citizenship automatically. Since this law also came with another exercise of identification of illegal migrants, it was feared that a large number of Muslims would be declared stateless.

India’s national capital Delhi also witnessed one the worst communal riots, which started on Feb. 23 and lasted for five days. At least 51 civilians including police and an intelligence officer were reported killed. Also, a least 79 civilians reportedly died in protests across the country.