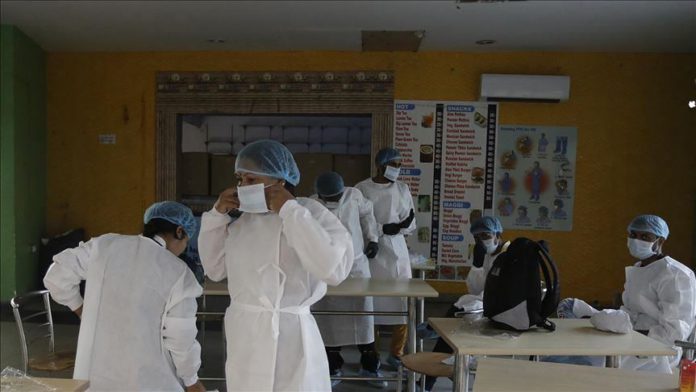 Hundreds of doctors and nursing staff of a government-run Delhi hospital designed for COVID-19 patients continued their strike for the third day as the country recorded over 78,500 more positive cases on Thursday.

Around 800 health workers at the Hindu Rao Hospital went on a strike on Tuesday, citing unpaid salaries for months, calling it “no pay, no work”.

The strike turned into protest amid the ongoing worst of COVID-19 situation in the country as the total number of confirmed positive cases surpassed 6.8 million with over 105,526 deaths.

India is the second worst-hit country in the world after the US and its medical infrastructure is currently under pressure.

The strike has disrupted patient care in the capital’s biggest COVID-19 facility.

On Wednesday, the group of doctors and medics held placards and raised slogans on the hospital’s main gate, demanding their due salaries, which have not been released since June.

“We are risking our lives for humanity in this pandemic. Payment of salaries is our basic right and delays cannot keep happening,” Dr. Abhimanyu Sardana, president of Resident Doctors Association at the hospital, told Anadolu Agency.

Sardana also confirmed that of the total 1,500 staff at the hospital, at least 800 have gone on an indefinite strike thus affecting patient care.

The country recorded 78,524 fresh COVID-19 cases and 971 deaths in the last 24 hours till Thursday morning.

With such protests being a recurring issue since the outbreak started in India, the country’s top court asked the government in June to take measures, warning of the dangers of having “dissatisfied soldiers in the war against the pandemic.”

Late last week, almost 5,000 government doctors in the southern state of Karnataka went on a strike to demand an improved payment structure from the central government.

However, in response, the state’s chief secretary passed an order on Sunday “prohibiting strikes, non-cooperation, disobeying or refusal of work related to health services, non-submission of reports, non-compliance to the orders issued by higher authorities,” local media reported.