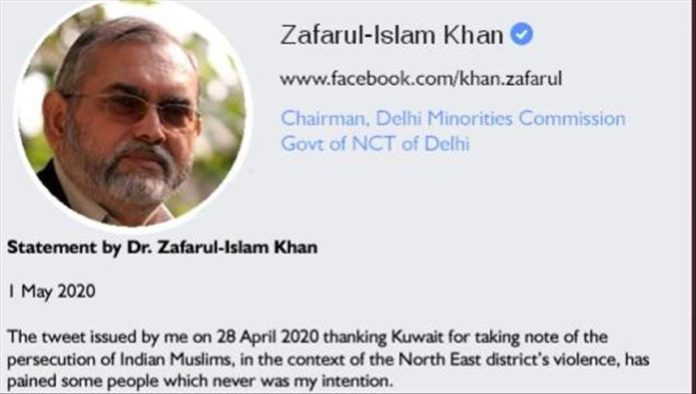 Amid the growing tide of Islamophobia in India, police in capital Delhi has booked head of a quasi-judicial body Zafarul Islam Khan for thanking Kuwaiti government for speaking in favor of Indian Muslims.

In an unprecedented event, the Special Cell of Delhi Police registered a case of sedition, charging Khan, chairman of Delhi Minority Commission, a constitutional body, for the subversion of the constitution and incitement of discontent.

The move came after Khan wrote on his social Media last week: “Thank you Kuwait for standing with the Indian Muslims! The Hindutva bigots calculated that given the huge economic stakes involved the Muslim and Arab world will not care about the persecution of Muslims in India. The bigots forgot that Indian Muslims enjoy huge goodwill in the eyes of the Arab and Muslim world for their services over centuries to Islamic causes, excellence in Islamic and Arabic scholarship, cultural and civilisational gifts to world heritage.

“Names like Shah Waliullah Dehlavi, Iqbal, Abul Hasan Nadwi, Wahiduddin Khan, Zakir Naik and many others are respected household names in the Arab and Muslim world. Mind you, bigots, Indian Muslims have opted until now not to complain to the Arab and Muslim world about your hate campaigns and lynchings and riots. The day they are pushed to do that, bigots will face an avalanche.”

The strict penal provision demands a punishment up to life imprisonment. Many prominent Indian citizens have issued a public statement expressing support for Khan.

In an exclusive interview with Anadolu Agency, Khan, also an author and journalist said he believed in core ideals of Indian secularism and rejects the politics of hate.

Anadolu Agency: What message you wanted to give through your social media post, that has become controversial and described provocative by a section of the media?

Zafarul Islam Khan (ZIK): Indian Muslims since long have faced communal violence and marginalization. Under the current central government, we had a campaign by radical Hindu outfits to convert Muslims to Hinduism, attacks in the name of cow protection, and lynching on a wide scale until these stopped some time back when those behind them realized that it was giving them very bad publicity internationally. So, these attacks stopped abruptly just as they had started abruptly.

But policies of polarization and marginalization continue unabated. The latest was the citizenship law controversy which in essence wanted to push Muslims to second-class citizens’ status. Protests were held all over the country, some lasted more than one hundred days. Then came the manufactured riots in the northeast district of Delhi. These riots broke the back of the Muslim community in parts of the national capital. The hate-mongers were so blind that in their planning they failed to factor the very high-profile visit of US President Donald Trump.

The riots were taking place barely six kilometers away from the place where Trump and the foreign journalists were staying. The journalists rushed to the northeast district to cover the violence. This brought a very bad name to our country. These reports, coupled with the anti-citizenship law protests all over the country, reached all over the world.

Reactions came from countries and organizations including from the Arab world. One such reaction came in the shape of an official decision of the council of ministers of Kuwait. I saw, rather belatedly, a copy of this decision of the Kuwaiti government in the form of a letter sent from the council of ministers to the foreign minister of Kuwait to act on this decision. I liked this gesture and decided to thank Kuwait for it. This is how that tweet in question was written.

Q: What were the contents of the tweet and why it became controversial?

ZIK: In this tweet, I said that Indian Muslims have never complained to the Arab and Muslim world about their persecution in India and if they did, Hindutva bigots will face an avalanche. A section of media and leaders of a particular party distorted my tweet, which had to be brief per se. They claimed that I had invited foreign intervention in my country, that I had complained against India to foreign countries and that I was threatening Indian bigots. I had not invited anyone or even remotely hinted at it. Rather, I had only said that if this happened, an avalanche will be let loose against the hate-mongers but the media interpreted my thank you tweet to an invitation of foreign intervention which never was my intention and is not supported by the words I wrote.

After all this protest and misreporting of my tweet, I realized that I had said something, though correct, at the wrong time. We are facing a medical emergency and the whole country is preoccupied with the same. This is why two days later I issued another tweet apologizing to people whose sentiments were hurt, saying specifically that the tweet was ill-timed and insensitive. But I never took back my tweet or deleted it.

Q: Delhi Police has filed charges under stringent clauses of sedition against you. What is your view on this action?

ZIK: The charges of sedition against me are baseless and will not stand in any court of law. This is sheer misuse of authority by the rulers of the day but these will be thrown out in courts. Some top legal experts in the country have told me that the police claim against me will fall flat in the court.

Q: Do you think this law is purely used now to instill fear and intimidate people who write or protest against authority?

ZIK: I stand by my core beliefs and ideals of Indian secularism and patriotism and reject the politics of hate. No amount of intimidation will make me change my views and convictions which have been formulated over many years.