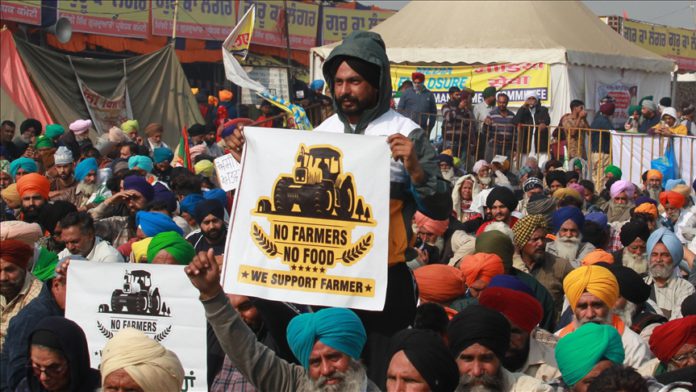 Protesting farmers in India agreed on Saturday to hold talks with the government as thousands continue to camp on the borders around the capital New Delhi, demanding a rollback of three new farm laws passed earlier this year.

Addressing a press conference on Saturday evening, leaders representing 40 farmer groups said they proposed to hold the next round of talks on Dec. 29.

“We have decided to hold talks and are giving a proposal. Our proposal is that talks between representatives of farmers and the central government be held on December 29 at 11 a.m.,” said Yogendra Yadav, from the Swaraj India organization.

While reading out the letter sent to the government, Yadav said the first item on the agenda of the meeting should be the modalities of repealing the three laws.

Darshan Pal, another leader among the farmers said they would organize a “tractor march” from the Singhu border on the outskirts of the capital on Dec. 30. “New year is coming. We’re inviting the people of Delhi and the adjoining areas to come and celebrate their New Year on January 1, 2021, and have meals with us,” he said.

The Singhu border is New Delhi’s northern entrance from the Haryana state and is presently filled with thousands of farmers.

Three new agriculture laws passed in parliament triggered the agitation, with thousands of protesting farmers pushing for authorities to repeal them.

The deadlock over the agitation has continued for weeks as farmer representatives are demanding nothing less than the laws’ rollback.

Local media reported Saturday that the Bharatiya Janta Party (BJP)-led National Democratic Alliance (NDA) which is ruling the Indian government, lost one of its allies, the Rashtriya Loktantrik Party, as its chief joined the farmers in the ongoing protest.

In September, the Indian government announced “three agricultural reforms,” that many suspect will further exploit farmers and threaten food security in the country.

The new reforms allow large companies to buy produce from farmers directly. In India, farmers usually sell their produce at local state-registered markets that ensure they receive a minimum support price, which protects them from price shocks in case of a bad crop year.

Farmers believe that in the absence of state regulators, big corporations will exploit them. The new laws also include the promotion of contract farming and lift a ban on the storage of potatoes, onions, and pulses.

While the Indian government is trying to resolve the matter through talks and so far several rounds of talks have taken place, there has been no conclusion yet.

US stock market opens higher to recover from major losses