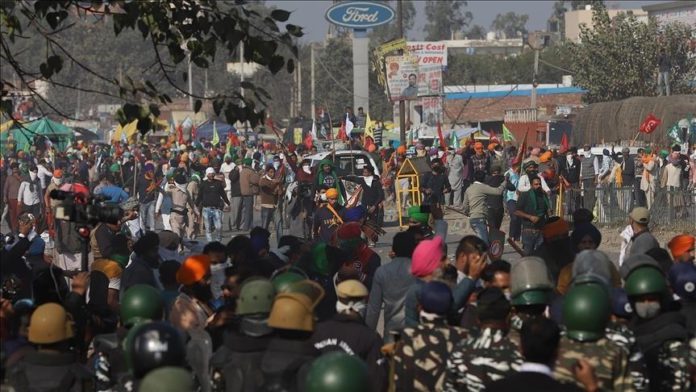 With groups of farmers rejecting the Indian government proposal and showing intention to continue agitation against three amended agriculture laws, experts apprehend that the protests may spread further and turn bigger in the coming days.

Thousands of farmers have been camping around the borders of the Indian capital New Delhi over two weeks and have now also warned to intensify agitation, including a countrywide protest on Monday.

The farmers are protesting against the new agriculture laws approved in September and are demanding their rollback.

“If the solution is not found soon, the protest may spread to other parts of the country. If this continue for some time, there are chances that more people may also join, like unemployed youth, etc. It may even become a bigger protest,” says Dalip Sharma, director general of Krishi Udyami Krishak Vikas, a farm body.

He asked the government to play a more active role to solve the crisis.

“If they [government] say that laws are for the benefit of the farmers, they have to convince them properly. If it is beneficial for farmers, why are they protesting against it?” asked Sharma, who is also associated with the north India-based Punjab Chamber of Commerce and Industry.

Earlier this week, the Indian government agreed to give in writing to the farmer leadership that the minimum support price (MSP) will continue to remain as it was before. The MSP protects farmers from price shocks in case of a bad or excessive crop.

On Thursday, addressing a news conference, top ministers appealed to farmers to end the agitation and join the next round of talks.

But the farmer groups rejected the proposal.

“They have not talked about the repeal of three bills in the proposal. We have been saying make a law to guarantee MSP in all the meetings. It has been decided by the farmers together that until the laws are repealed, we will not leave Delhi,” Rakesh Tikait, a senior member of the Bharatiya Kisan Union, a farmer group, told Anadolu Agency.

He added that farmers are not ready to accept the amendments.

Stalemate is source of concern

Another leader Boota Singh said that farmers will block the railway tracks if Prime Minister Narendra Modi does not listen to them.

Speaking to Anadolu Agency, Devinder Sharma, a food and trade policy analyst, described continuity of stalemate as a cause of concern.

“We don’t know where it will end. It is winter and people are camping on the roads. I think everyone should be worried. We don’t want more people to die. We have already 15 deaths and no one would want to see more people dying or falling sick,” he said.

He asked the government to be generous enough to listen to the demand of farmers.

“They [farmers] are camping there and are ready for a longer stay. I would not be surprised if you want to test their patience, they can stay up to one year. They have supplies with them,” said Sharma, adding that the ongoing agitation “is the culmination of the anger that was building up over the years.”

Echoing Sharma’s concerns, Sukhpal Singh, professor at Indian Institute of Management (IIM) Ahmedabad, said an early resolution is needed and if the issue does not get resolved soon, it will become difficult for both parties to handle it.

“Each day the number of protestors is growing and it has turned into an emotional issue for many, besides the politics of things can’t go on for long like this, “he said.

The agitation has received support from different sections of society, including the opposition parties, queering the pitch further for the government.

On Wednesday evening, a delegation of political parties — including the leader of the main opposition Congress Rahul Gandhi — met President Ram Nath Kovind, demanding a roll back of three farm laws passed by parliament.

Political analysts in India see the agitation as a big challenge to the Hindu nationalist Bharatiya Janta Party (BJP).

“There have been many farm protests before and after independence in India. I think in the last three decades, I have not seen such a movement of big protests by farmers with such huge mobilization… protests have also brought a big challenge at the society and political level to the BJP government in India,” Urmilesh Singh, a New Delhi-based political commentator, told Anadolu Agency.

In September, the Indian government announced “three agricultural reforms” which the experts believed will further exploit farmers and threaten the food security of the country.

The new reforms allowed large companies to buy product from farmers directly. In India, farmers usually sell their products at the state-registered local markets that ensure them a minimum support price, which protects them from price shocks in case of a bad crop year.

Farmers believed that in the absence of state regulators big corporations will exploit them. The new laws also include the promotion of contract farming and lifting the ban on the storage of potatoes, onions, and pulses.

The Indian government is trying to resolve the issue through talks. But even after five rounds of talks between the government and representatives of farmers, there is no end to the crises so far.