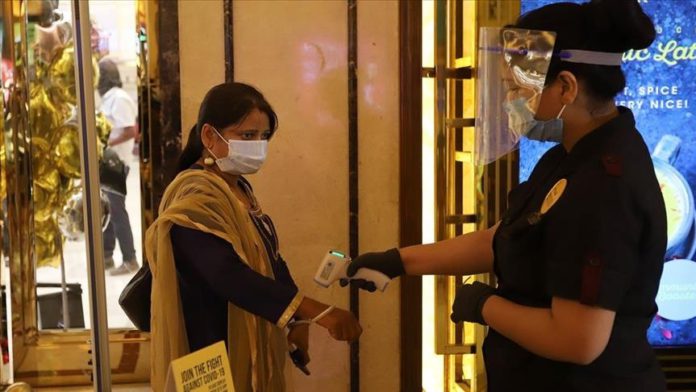 Gayatri Kumar, 22, died of tuberculosis (TB) last month in India’s eastern province of Bihar. The young woman was suffering from multidrug-resistant TB for over the past year. She was on medication, but the lockdown enforced by COVID-19 put a stop to her treatment.

Her brother, Rajpal Kumar, had been running from pillar to post to get the treatment.

“The tuberculosis hospital in our city had been converted to a COVID-19 designated hospital. While her condition worsened, she was not allowed a bed inside. We had no idea where else to take her,” a sobbing Kumar told Anadolu Agency.

Experts believe that with resources being diverting to treat COVID-19 patients, the surveillance, contact tracing, and testing for tuberculosis has nearly ceased, leading to an alternate public health crisis.

Official statistics reveal that at least 1,200 people die because of TB in the country every day and another 7,500 get infected from the disease.

According to a report released in June, the COVID-19 had consumed 15,000 lives in the first three months of its outbreak. But in the same period, 20,000 people lost their lives to the TB.

Speaking to Anadolu Agency, Shibu Vijayan, global technical TB director at PATH — an organization that works with the government formulating a response to TB — pointed out that TB-care cannot be neglected in a country with such a high load.

“Lockdown, social distancing, isolation strategies, and public health guidelines to prevent viral transmission impacted the delivery of all aspects of tuberculosis care. It is still the world’s deadliest infectious disease and thus needs to be dealt with an uninterrupted supply of drugs,” said Vijayan.

He said even nine months since the outbreak of the pandemic, the health system is still failing to address the discrepancies including access to medical services and procurement of drugs.

“While the government assured that it has enough drugs for the year, the lockdown migration led to a communication loss, as the systems were not updated and the destination officers were not informed,” said Vijayan.

Addressing a press conference last week Health Minister Dr. Harsh Vardhan admitted that the “deadly virus has derailed the painstaking efforts of many decades” and diverted scientific attention from the infectious killer disease.

“We know that the last ten months have seen treatment interruptions, hindered availability of drugs, shrinking supply of diagnostic tests, delays in diagnosis, interrupted supply chains, diversion of manufacturing capacity and imposition of physical barriers for patients who must travel to distant clinics to pick up the medications,” he said.

The pandemic outbreak has affected the detection and registration of new TB patients as well. This year till October, only 14.5 lakh TB cases were notified which is 29% lower than the same period in 2019.

Experts say the decrease in the diagnosis and notification of tuberculosis has been the main cause of worry during the pandemic.

Speaking to Anadolu Agency, Anant Bhan, a global health researcher in bioethics and health policy, asked the government to push resources simultaneously and focus on the prevention programs.

“We are in the middle of a syndemic [two or more sequential epidemics] here, where all the non-COVID-19 treatments have either been neglected or completely stopped. For instance, immunizations, maternal care have faced serious neglect and the prevention focus programs have come to a complete halt,” said Bhan.

Of the nearly 3 million notification targets, the country has only achieved half its target with 1,565,108 till Nov. 26.

During the first six months of this year, over half a million cases could not be notified against an estimated target, and 42% of TB patients did not receive a government benefit payment.

India accounts for over one-fourth I.e., 27%, of the global TB cases. This amounts to 2.7 million out of the 10 million cases worldwide. The disease killed approximately 450,000 Indians in 2019.

One-third of the global drug-resistant TB cases are in India, according to the World Health Organization (WHO).

With a target to eliminate the disease by 2025, the country had been running various programs. But the recent government data suggests that the country is 48% behind its notification target.

While the health minister confirmed that they are now focusing on putting things back on track, experts believe that no amount of effort can help achieve the 2025 TB targets anymore.

Chapal Mehra, a public health expert and author of Tuberculosis – India’s Ticking Time Bomb, said all TB efforts are being redirected towards COVID-19 care, which leads to the derailment of the program.

“We will never achieve the set targets, we are at least a decade behind our initial targets, even if we manage to eliminate TB by 2030, it will be a miracle is happening,” said Mehra.

He further claimed since the disease is more prevalent among economically weaker sections, there is no immediate urge to eliminate it.

The Global TB burden report 2020, released by the UN in October, estimated that by the end of 2020, the death count due to TB will be a staggering 1.8 million, and the majority of those will be from India.