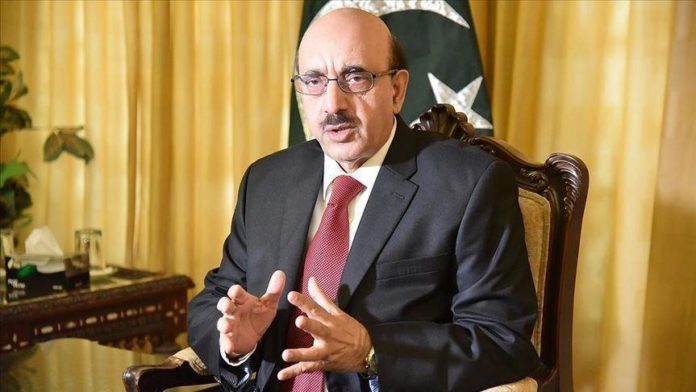 India has allowed over 3.2 million Hindus to settle in Indian-administered Jammu and Kashmir to change the Himalayan region’s Muslim majority status, said the president of Pakistan-administered Kashmir.

“Since last April until December 2020, the Indian government has given domiciles to 3.2 million Hindus and allowed them to settle in Indian Illegally Occupied Jammu and Kashmir [IIOJK],” Khan told a virtual conference hosted by Islamabad-based think tank Islamabad Institute of Conflict Resolution (IICR) on Thursday evening.

He warned that New Delhi is “preparing the ground for illegal settlements along the lines of Israel.”

“Massive investment is being directed to IIOJK so that these entrepreneurs and these investors also play a part in the occupation of the territory. There is also a land grab going on… I mean landlords have been modified to accommodate these settler economies, and also special colonies for ex-India army personnel,” he alleged.

Nasir Qadri, who is executive director of the international advocacy group Legal Forum for Kashmir, said India is “moving in Kashmir on the Israeli pattern.”

“The same strategy adopted by Israel in Palestine is being followed by India in IIOJK,” he said.

“To stop the demographic change in Kashmir, Pakistan has no other option than working on ‘advisory opinion’ at International Court of Justice [ICJ],” he proposed.

Following this mode, said Qadri, Pakistan can raise this particular issue of alleged demographic change before P5 members of UN Security Council and “ask them to refer this issue to ICJ for an advisory opinion.”

Touching upon the recent de-escalation agreement along the Kashmir border between Pakistan and India, Former Pakistani military general and defense analyst Amjad Shoaib said the Chinese action in Ladakh areas of Jammu and Kashmir had “forced India to go defensive.”

“India is unable to face tension on two fronts and recent Chinese action in Ladakh forced New Delhi for de-escalation on Line of Control,” said Shoaib, referring to the de facto border that divides Kashmir between India and Pakistan.

In a rare move in February, the militaries of the two nuclear-armed neighbors agreed to renew the 2003 cease-fire along the LoC, which has witnessed a massive escalation in violations in the past few years.

India is currently in talks with China for disengagement after skirmishes along the Sino-Indian border last May caused casualties on both sides.

In August 2019, the Indian government scrapped the special status of the region, allowing non-Kashmiris to buy property in the Muslim-majority state amid fears by locals that this will lead to demographic changes.

'For 50 years, Greek Orthodox Patriarchate has refused to open Halki...

Turkey to lay foundation for Canal Istanbul on Saturday