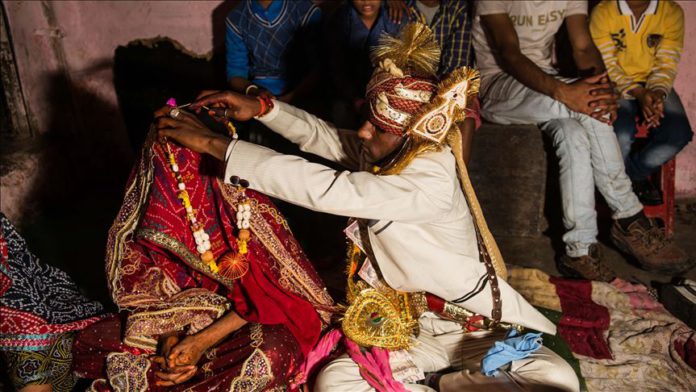 Even as India has become home to the largest number of child brides in the world, it has set up a 10-member task force to determine the right age for women to marry and become mothers.

Headed by Jaya Jaitly, an Indian politician and social activist, the task force which will also examine the correlation between the age of marriage and motherhood will submit its report by July 31.

According to a study conducted by global agency UNICEF in 2017, as many as 27% of girls in India are married off before their 18th birthday. The study further says that at least 1.5 million girls under the age of 18 are married in India every year.

There are fears that the situation exacerbated by the COVID-19 pandemic hitting economies of people will drive many families, especially in India to marry off their daughters early.

“It is likely we are going to see large numbers of child marriages. This could undo decades of work we have done to reduce child marriage,” said Girls Not Brides Chief Executive Faith Mwangi-Powell.

A paper released by the global agency in April had apprehended that adolescent girls would become vulnerable due to situation exacerbated by the COVID-19 pandemic.

It said that COVID-19 would “heighten pre-existing risks of gender-based violence against girls, stymie their social, economic and educational development, and threaten their sexual reproductive health”.

Speaking to Anadolu Agency, Jaitly said keeping in view Indian situation, the issue of child marriage is a complex one as it involves various factors including health and education.

“India is a layered society with different mindsets. While the poverty-stricken, oppressed community tries to marry off their daughter before 18, the urban women population looks at more possibilities in terms of career,” she said.

“You can decide the country’s fate at 18, but you cannot marry someone at that age is going to be a challenge to convince,” she said, referring to the raging debate, as voting age in India had been lowered from 21-18 in 1988.

According to a law enacted in 1978, while the legal age of marriage for women was raised from 15-18, the biggest challenge has been its implementation.

Admitting that the biggest challenge would be to develop an implementation mechanism for the new proposed law, Jaitley said the help from local police, doctors, and community heads will be solicited in the new law.

“Communities, especially the oppressed ones, fear that the daughter should be married off sooner before puberty hits. This will have to be dealt with by creating more awareness. We are looking to add all of this in our report,” she said.

A report released by the National Commission for Protection of Child Rights in 2018 had found linkages between child marriages and poverty. “It is evident from the findings that a girl from a poor family is more likely to getting married at a younger age than a girl from a wealthier family,” the report said.

Early marriages have often shattered the career dreams of many women like Farzana Ali, who wanted to become an interior designer. Soon after enrolling herself in a graduate program at the age of 17, she was engaged to her childhood friend.

Her in-laws and husband did not allow her to continue working after marriage. Though married at the barely legal age of 18, she could not pursue a career.

“At 20, I bore my first child. With the child, household chores, and taking care of my husband’s family- the dream of becoming a professional just came to a full stop,” Ali told Anadolu Agency.

While the prevalence of girls getting married before the age of 18 has declined from 47% as recorded in 2005 to 27% in 2016, the numbers are still staggering.

Last February in her speech, while presenting annual budget Finance Minister, Nirmala Sitharaman had stressed the need to lower the maternal mortality ratio.

“Entire issue about the age of a girl entering motherhood needs to be seen in this light. I propose to appoint a task force that will present its recommendations in six months,” she said.

According to the Ministry of Statistics and Program Implementation, the average age at which women are married in rural areas is 21, while it stands at 23 in urban areas. It is also important to note here that child marriage is more prevalent in rural (14.1%) than in urban India (6.9%).