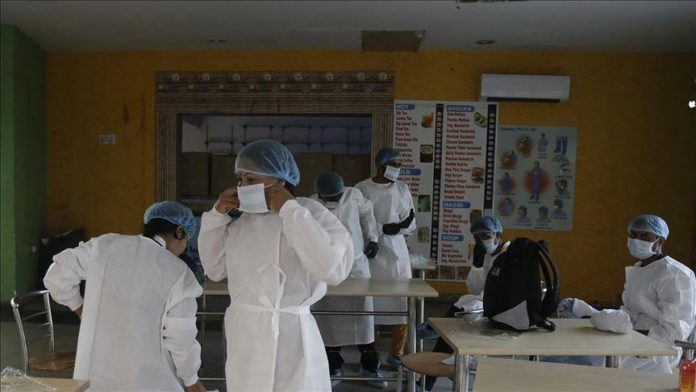 India’s novel coronavirus case count on Wednesday neared the 8 million mark after the country registered 43,893 infections over the past day, official figures revealed.

The spike came a day after the country reported its lowest cases in a single day since July at 36,370.

Despite the increase in coronavirus infections and India being one of the worst-hit countries, the doctors at a state-run hospital in the Indian capital have been on an indefinite hunger strike since Oct. 23 to demand pending salaries, thus affecting patient care.

Late on Tuesday, in support of the protesting doctors, the nationwide Resident Doctors’ Association wrote a letter to Prime Minister Narendra Modi demanding compensation to frontline “warriors” of the pandemic.

“It is disheartening to see that the same doctors who had been praised as ‘heroes’ and ‘warriors’ during this pandemic are even deprived of their basic salary and forced to work under such extreme stressful times[…]Their sacrifices being extremely demeaned to no value,” read the letter.

With the fresh cases, India’s COVID-19 infections tally stood at 7.99 million, while the death toll crossed the 120,000 mark to reach 120,010 with 508 additional deaths by Wednesday morning.

Over 7 million patients have recovered from the disease in the country, including 58,439 in the last 24 hours, pushing the recovery rate to 90.85%. The total number of active cases in the country now stands at 610,803.

The ministry also extended for a month ongoing eased measures that had been in place since Sept. 30, allowing for cinema halls, swimming pools for sports training and entertainment parks, multiplexes and other venues to stay open until Nov. 30, after which new monthly measures will be in effect.

Across the world, COVID-19 has claimed more than 1.16 million lives in 189 countries and regions since last December. The US, India, and Brazil are currently the worst-hit countries.