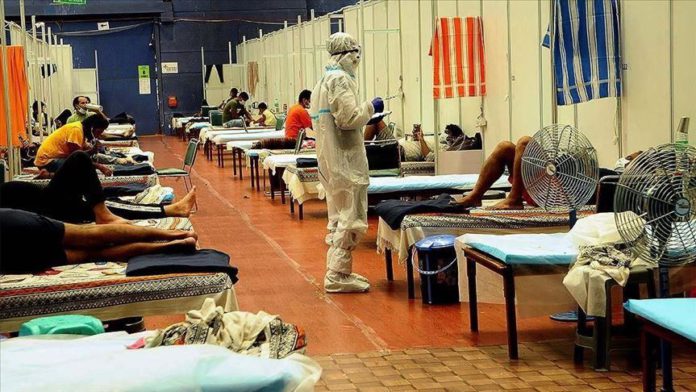 As India approaches three million cases of the novel coronavirus, adding over 50,000 infections each day since late July, health experts cite setbacks in primary health care to contain the virus and a huge population as the prime reasons for COVID-19’s rapid spread.

As of Thursday, according to data released by the Ministry of Health, the number of cases has reached to 2.83 million, while the death toll now stands at 53,866.

“We focused too much on building ventilators and intensive care units because that is where we thought in March our priorities might lie. But, in terms of public health capacity, through primary healthcare practices like early detection through symptomatic household surveillance and energetic contact tracing, some of these measures really didn’t succeed very much,” K. Srinath Reddy, president of the Public Health Foundation of India, told Anadolu Agency.

Control of crowded events, whether in markets or religious space, have not been successful on the ground, said the head of the Delhi-based think tank, adding: “They [control measures] haven’t been applied strictly as they were applied in the first two phases of lockdown.”

Ramanan Laxminarayan, director of the Washington-based Center for Disease Dynamics, Economics & Policy, said that given the population and public health infrastructure, India could only hope to delay, but not eliminate, COVID-19.

“I had said back in March in a New York Times op-ed that given the population and public health infrastructure, India could only hope to delay but not eliminate COVID. Nothing has changed since then. Lockdowns are periodic brakes on transmission but the COVID train continues to move along,” he told Anadolu Agency, adding that “we have to hope for a safe and effective vaccine at the earliest.”

With the number of COVID-19 cases steadily increasing each day, India is approaching pandemic figures similar to those of Brazil, which is currently ranked second in the world in both infections and deaths. India recently added one million cases in just 20 days.

Experts worry that India may even surpass the US — the worst-affected country worldwide — in the severity of the pandemic.

“India may soon cross Brazil and eventually the US as well,” Himanshu Sikka, the lead health officer at IPE global, an international healthcare development consultancy based in India, told Anadolu Agency. “The number of cases will keep increasing in the coming two to three months and may eventually surpass the US as well.”

Sikka added, however, that India had not failed to control the virus.

“The death rate of under 2% and recovery rate of over 70% is a direct result of the lockdown decisions in the [pandemic’s] early days. The increase in COVID-19 cases is also a direct result of increased testing. India was testing a few hundred per day in March and is now close to a million tests per day. So, in my view, India has not failed in controlling COVID-19 but slowed it down considerably,” he said.

According to health experts, the spread of the virus to new areas in the country also adds to the new case numbers.

“As the country started opening up, it started spreading to other parts also.”

He added that after being relatively less affected at the beginning of the outbreak, the country’s eastern region had also begun to suffer under the virus.

“The spread is now worrisome,” said Reddy. “The rural areas were pretty much under control and unexposed,” said Reddy, adding that this was changing “partly because of the migrants who returned to their homes from urban areas.”

According to Reddy, the situation now needs to be tackled at a micro level, “ward-by-ward in each city and in village clusters of houses.”

“Whenever cases break out, we should have effective surveillance and containments. You cannot do a mass lockdown again,” he said, adding that focus should be on making primary healthcare services “better for early identification, containment and contact tracing.”

Dr. Digambar Behera, a renowned chest specialist in India, told Anadolu Agency that authorities should now focus on tracing new cases and isolating them. “Since the number is increasing every day, the strategy should now be to trace the infected cases and isolate,” he said, adding that community spread had already commenced.

While the number of cases in the country continues to increase, the Indian government is showcasing its achievements in recoveries. A government statement on Thursday said the total number of recoveries had passed two million.

The Health Ministry said in a statement Thursday that recoveries had reached 58,794 in the past 24 hours, with the recovery rate at nearly 74%.

It added that these figures reflected “that the number of patients recovering is on a steady rise over the past several months.”