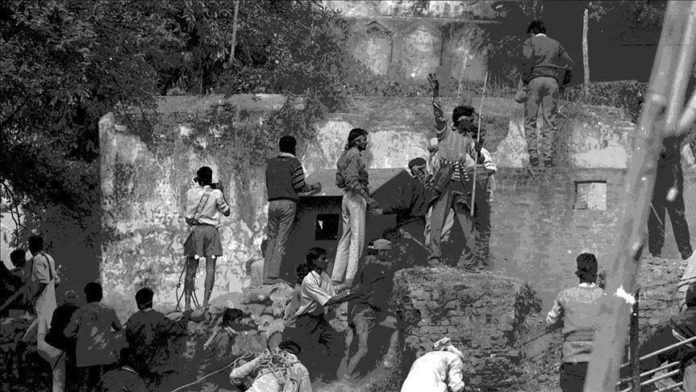 A special court in India on Wednesday acquitted all the 32 surviving accused in the Babri Mosque demolition case.

The verdict in the criminal case related to the Babri Mosque demolition came almost 28 years after it was pulled down by a frenzied mob in the north Indian town of Ayodhya.

Judge SK Yadav, on his last day in office, observed that evidence against the accused is not strong enough and the Babri Mosque demolition incident was not pre-planned.

As many as 32 leaders of the ruling Bharatiya Janata Party (BJP) were charged in the case, including the former Deputy Prime Minister Lal Krishna Advani, and his associates Murli Manohar Joshi, Kalyan Singh, Uma Bharti, as well as Hindu religious leaders Sadhvi Rithambara, Nritya Gopal Das, and Vinay Katiyar.

Last month, the Supreme Court had set Sept. 30 as the deadline to conclude the trial and pronouncing the judgment.

The 400-year-old Babri Mosque in the city of Ayodhya in Uttar Pradesh province was razed on Dec. 6, 1992, by a large group of activists belonging to the Hindu nationalist organizations Vishwa Hindu Parishad (VHP), affiliated to Rashtriya Swayamsevak Sangh (RSS). They claimed that the mosque stood on the birthplace of deity Ram.

The Supreme Court, which delivered the ownership verdict in November last year, however, disputed that the mosque had been construction on any demolished temple.

The Babri Mosque was built in 1528 by Mughal military officer Mir Baqi, on the orders of Emperor Babur.

The mosque was targeted after a political rally involving about 150,000 Hindu activists and BJP volunteers, who had gathered at the site of the site turned violent.

A consequent probe into the incident found 68 people responsible, including many senior leaders of the ruling BJP and the VHP, who allegedly delivered provocative speeches inciting the mob to tear down the structure.

Currently, the BJP is in power both at the national level and in the state of Uttar Pradesh.