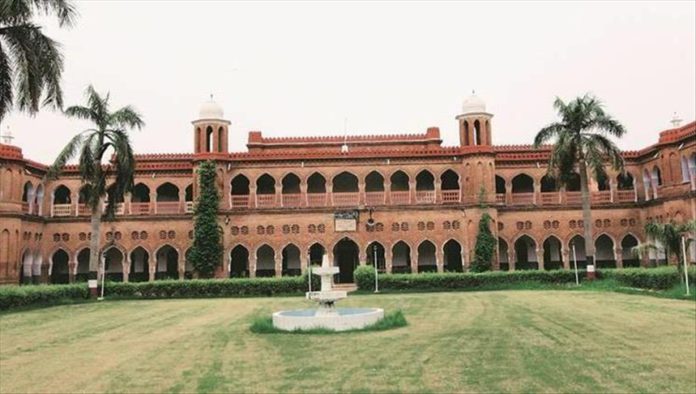 Although COVID-19 became a dampener in the centennial celebrations of India’s world-famous Aligarh Muslim University (AMU), its contribution in shaping up South Asian Muslim politics and its Turkish connections did not go off the radar.

Having produced eight heads of states five of whom ruled Pakistan, one each Bangladesh, Maldives, and India, and more than 50 chief ministers, governors, chief justices, and central ministers over the past century, the AMU boasts an unparalleled record in terms of nursing its students and putting a pugmark on the pages of history.

The 19th-century reformer and thinker Sir Syed Ahmed Khan had set up a modern boarding college in 1877, which soon became an incubator for South Asia’s Muslim politics and a repository against British colonial rule. It was upgraded into a university in December 1920 after a long struggle.

Scholar Gail Minault, professor emerita at the US-based University of Texas, recalls how students of the college cut down their expenses on food to contribute generously to the Turkish relief fund during Tripolitan and Balkan conflicts from 1912-13. The students raised an amount of 13,800 Ottoman liras, which is converted into current gold rates equals 42 million Turkish liras ($5 million).

It was not only money but at the behest of Dr. Ahmed Mukhtar Ansari, who later led India’s freedom movement as president of Congress party (1927–1928), 23 students of the college abandoned their studies and volunteered to work in a medical mission to help Turks during the war.

In his memoirs, Chaudhry Khaliquzzaman, a top Pakistani politician, who also held the position of governor and the country’s envoy in Indonesia and the Philippines, records that while playing tennis at the college court in Aligarh, Ansari convinced him to volunteer to help Turkey in distress.

“He [Ansari] told me that he has come to Aligarh to find some young men to go with him to help him discharge his duties…By the evening I had made up my mind to join the mission,” he wrote.

Among other students of Aligarh, who joined Ansari’s mission was Kashmiri origin Pathan Abdur Rehman (Samdani) Peshawari, who later held the distinction to become the first reporter for the Turkish news wire Anadolu Agency, when it was setup in 1920.

When the British for a long time were refusing to convert the college into a full-fledged university, Ansari had hit upon the idea to set up an institution with similar aim and values in Turkey.

According to senior Turkish diplomat Burak Akcapar, Ansari besides treating wounded Turkish soldiers had devoted his energies to the establishment of a Muslim university under the name of Medina University on the patterns of Aligarh College.

The letters written by Ansari suggest that the Turkish Ministry of Evkaf (religious endowments) had shown great zeal and hailed the project as the beginning of the great renaissance in the Islamic world.

The land measuring 65,000 acres near the railway station in Ankara and 45,000 acres in Adana was identified. It was also debated that the university may set up its campuses in Bursa and Konya as well. Therefore, the land of 20,000-25,000 acres was identified in these cities as well.

It was also decided to draft the top brains of the Muslim world’s poet-philosopher Muhammad Iqbal, Shibli Nomani, and few leading Turkish intellectuals to make a curriculum for the university. But the project did not move forward.

“While the project was aborted, the intention to establish it can be seen as a manifestation of internationalist and modernist pan-Islamism, aiming at the revival of the fortunes of the Muslim world through education,” said Akcapar, who is also the author of People’s Mission to The Ottoman Empire.

In 1920, the British agreed to upgrade Aligarh college into a university, thus fulfilling the aim and the concept of Ansari. The university adopted a Turkish cap and coat as its official dress.

Birth of Aligarh and Deoband

The birth of Aligarh college also has an interesting history.

Two decades after the British completely took over India in 1857 by sealing the fate of the once powerful Mughal Empire, two students of Molvi Mamlook at Delhi Madrassa (now Anglo-Arabic School) thought to infuse confidence among the battered and depressed Muslims.

While they agreed to promote education as a defensive mechanism, they were poles apart over the strategy and nature of learning. Disturbed at the massacre of ulema (religious scholars) in western Uttar Pradesh town of Shamli in 1866, one of them Muhammad Qasim Nanatvi traveled in the region and established the world-famous seminary of Darul Uloom Deoband — known as the mother of madrassas dotting the landscape of South Asia. His idea was primarily to produce anti-West clergy and set up a force to attend to the religious requirements of Muslims.

Another student Sayyid Ahmed Khan took the southeast route and established a modern English medium Muhammadan Anglo-Oriental College — on the lines of Oxford and Cambridge in the outskirts of Aligarh town in the plains of Ganges and Yamuna rivers.

Like their founders, the two institutions have remained poles apart in terms of conduct and response to social and political developments. The immaculately dressed elite English-speaking Muslims educated from Aligarh in the later years were in the forefront demanding a share in political power and many of them supported the demand of a separate nation leading to the formation of Pakistan in 1947.

But hundreds of miles away at Deoband, kifaya clad Muslims supporting skull caps were fiercely opposing the creation of Pakistan. Braving popular sentiment, Deoband scholars and students fervently supported Congress and remained the party’s loyalists until1992, when the events leading to the demolition of Babri Masjid forced them to find refugees elsewhere.

Fighting for existence and identity

Currently, the centrally funded AMU has 88 departments, several affiliated institutions, high schools, and centers covering an area of 1,115 acres in the city of Aligarh, 200 kilometers from the national capital New Delhi. While it has enrolled students from all backgrounds, approximately 77% are Muslim.

Nearly a century later, the university is now under attack on many fronts. Although in 1981 Indian Parliament had declared the AMU a minority institution to promote education among Muslims, the Allahabad High Court, on Jan. 5, 2006, held this law unconstitutional. The matter is currently pending before the Supreme Court, where many elements of the central government are now pushing to abolish the Muslim character of the university.

Over the years, the university had developed its ethos and philosophy — known as Aligarh culture.

Male students are dressed in a black sherwani (a long coat that is buttoned along its length). A senior student is considered as the patron of juniors to guide and even help them financially. Even after leaving the university, the junior student is not expected to pull out his wallet in presence of a senior. The strong Aligarh alumni communities spread all over the world affirms the lasting bond of respect and affection built among the students by the unique culture.

The AMU still stands testimony to Sir Syed‘s quest for reforms in education and a fulcrum for Muslims in South Asia. But grappling with its existential threat and identity crisis, it has seized its role in producing leaders and visionaries to lead the Muslims of South Asia. But its grandeur and splendor continue to remind verses of one of its famous student Urdu poet Asrarul Haq Majaz, who wrote for this institution:

Every night is the night of Egypt here, every evening is the evening of Shiraz here

The garden encompasses lyrics and tunes of the whole world

We have seen with our own eyes, the utter defeat of vanity

This is my garden, my garden and I am the nightingale of my garden