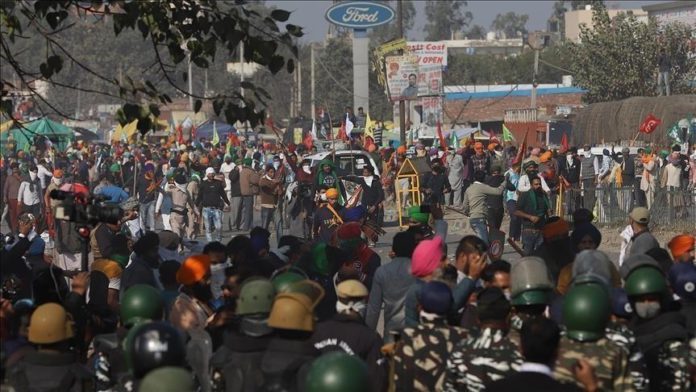 India’s main opposition party on Tuesday said 60 farmers have died since they began protesting against new agricultural laws over a month ago.

In a tweet, Indian National Congress leader Rahul Gandhi said the government’s “apathy and arrogance” has led to the loss of lives, which, “instead of wiping their tears,” is “attacking them with tear gas.”

“Such brutality, [is] just to promote crony capitalists’ business interests,” he said.

Thousands of farmers are encamped at borders around New Delhi, demanding a roll back of agricultural laws passed in September they believe will lead to their exploitation.

Police have, on a couple of occasions, fired tear gas to keep them from entering the national capital.

The protesters also maintain that 60 of their fraternity members have died since the agitation started in November.

“They sacrificed their lives for the movement,” Rakesh Tikait, a senior member of the Bharatiya Kisan Union, a farmer group, told Anadolu Agency. “We won’t accept anything less than a roll back.”

A health expert, meanwhile, said heart attack could be a likely cause of many deaths.

Northern India is currently reeling under an intense cold wave, with many cities over the New Year experiencing rain and even snowfall.

What are the new laws?

The news laws allow large corporations to buy agricultural produce from farmers directly. Farmers in India usually sell their produce at local state-registered markets that ensure them a minimum support price, thus protecting them from price shocks in case of a bad crop year.

Farmers believe that in the absence of state regulators, business groups will exploit them.

Reforms also include the promotion of contract farming, and lifting the ban on the storage of potatoes, onions, and pulses.

While the Indian government is trying to resolve the matter through talks, farmers insist that the laws be withdrawn.

As another round of talks with the government failed on Monday, the leaders, to intensify their protests, have decided to hold a “tractor march” at all protesting sites on Thursday.