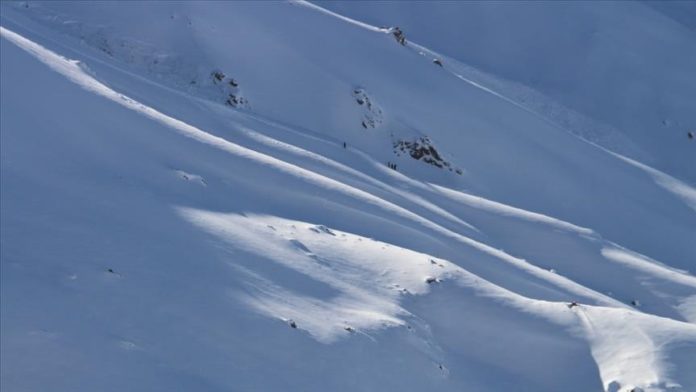 An Indian paramilitary trooper and an elderly woman died on Wednesday in the Indian-administered Kashmir after they came under heavy snow, according to officials.

“HC Murmu, a sub-inspector of Indian Central Reserve Police force, died after a snow-laden rooftop of the shed collapsed at former legislator’s residence in Srinagar on Wednesday where the deceased was on duty,” the local administration said.

An elderly woman also died after the snow had fallen from the roof of her house on Wednesday morning. “She was buried under heavy snow,” officials said.

Snow piled up on major roads and small lanes and there is no electricity in many parts of the region.

In areas of southern Kashmir around six to seven feet of of snowfall was recorded.

“Our men and machinery are on roads, we are trying to fix the damaged wires and poles, wherever possible we have restored the electricity in many areas,” Hashmat Qazi, the regional chief engineer of the Power Development Department, told Anadolu Agency.

For the fourth consecutive day, the Kashmir region remained cut-off from the rest of the world as air travel and road links remained suspended on Wednesday.

The regional traffic control department announced that due to the accumulation of heavy snow on the Srinagar-Jammu Highway, the only rail link connecting Jammu and Kashmir to the rest of the world will remain suspended for traffic movements.

Keeping in view the danger of landslides, the department said traffic movements will also remain suspended on Thursday.

According to the officials, around 4,000 commercial and non-commercial vehicles are stranded in the region for the last four days.

Meanwhile, due to poor visibility and snow accumulation on the runways, air traffic also remained suspended.​​​​​​​