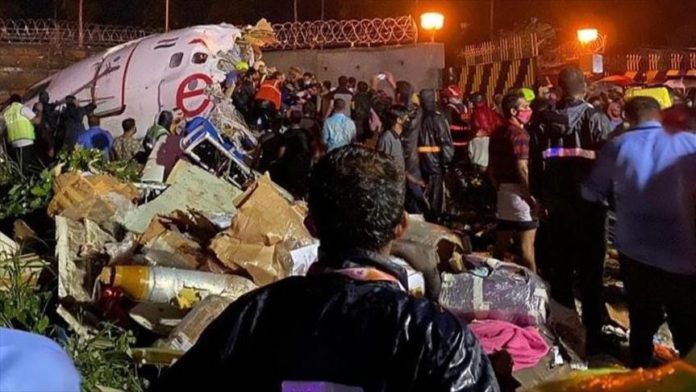 17 people, including a pilot, were killed and over 100 were injured after an Air India Express passenger plane with 190 people onboard skidded off the runway at the Kozhikode International Airport in the southern Indian state of Kerala on Friday evening amid the rainfall the state is witnessing.

A senior administrative official in the area, K. Gopalkrishnan, told media that 17 people died in the incident.

“As per the flight manifest there were 190 people on flight AXB-1344 including 174 adult passengers, 10 infants, 4 cabin crew & 2 pilots. … I offer my heartfelt condolences to their [of those who died] next of kin &pray for speedy recovery of the injured,” the country’s Aviation Minister Hardeep Singh Puri tweeted Friday night.

In another tweet, he said two investigation teams are being sent shortly to the Kozhikode.

“Two investigation teams of professionals from @airindiain @AAI_Official & AAIB will leave for Kozhikode at 02.00 hrs & 05.00 hrs. Everyone has now been rescued from the aircraft. Rescue operations are now complete. Injured being treated at various city hospitals,” he said.

Kerala police Chief Lokanath Behera told Anadolu Agency over the phone the number of injured is not known exactly as they have been taken to various hospitals. “Most of them apparently are injured. I have been told that some of the injured are serious,” he said.

Another police official in the area said the number of injured is more than 100. “They are receiving treatment at the hospitals,” he said.

Puri also said the plane broke into two pieces and the incident will be investigated.

Talking to Anadolu Agency, P.G. Prageesh, the head of the Corporate Communications of Air India Express, said there was no fire at the time of the landing. The aircraft skidded on the runway and fell into the valley next to the airport.

“There were a total of 174 passengers, 10 infants, 2 pilots, and four cabin crews on the aircraft. The rescue operations are on and we have also established helpline numbers for Sharjah,” said Prageesh.

Prime Minister Narendra Modi also said on Twitter: “Pained by the plane accident in Kozhikode. My thoughts are with those who lost their loved ones. May the injured recover at the earliest. Spoke to Kerala CM @vijayanpinarayi Ji regarding the situation. Authorities are at the spot, providing all assistance to the affected.”

Meanwhile, Pakistan Prime Minister Imran Khan wrote on Twitter: “Saddened to learn of the Air India plane crash in Kerala state leading to loss of innocent lives. May Allah give strength to the bereaved families in their difficult hour”.

Chinese Ambassador to India Sun Weidong said also on Twitter: “Shocked to hear about the tragic accident of #AirIndiaExpress aircraft in Kerala. My deep condolences to the families of the victims. Wish a quick recovery of the injured.”

US Ambassador to India, Ken Juster also expressed grief, saying: “On behalf of the U.S. Mission, we are deeply saddened by the news of the Air India accident in Kozhikode. The victims and their loved ones are in our thoughts and prayers.”