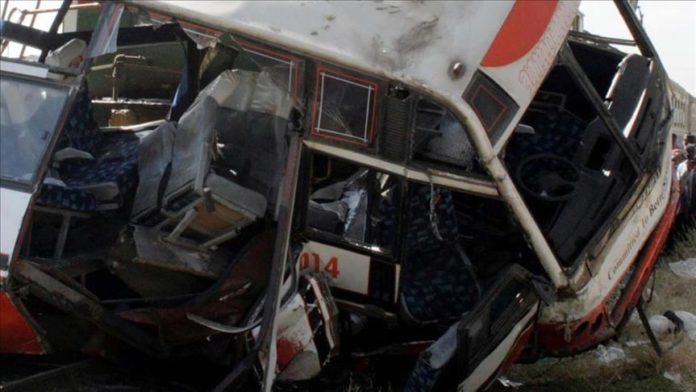 At least 14 migrant workers died and 50 were injured in two accidents in India, police officials said on Thursday.

The workers were among tens of thousands who have been returning to their rural hometowns from big cities due to the coronavirus lockdown in India.

In the northern state of Uttar Pradesh, six workers were run over by a government-operated bus while walking along a highway.

Five more were seriously injured in the accident on the Delhi-Saharanpur Highway near Muzaffarnagar, an official said.

Police officer Anil Kapavan told Anadolu Agency the workers were heading to their native village in the eastern state of Bihar from the northern Punjab state.

They were making the 1,500-kilometer (930 miles) journey because the factory they worked at shut down due to the pandemic.

The officer said the bus driver was arrested on the spot and faces criminal charges.

The other accident was in the central state of Madhya Pradesh, where eight workers died and 45 were injured in a collision between a truck and a bus.

The workers were on the truck and going to their villages in Uttar Pradesh from the western state of Maharashtra.

“All of them were coming from Mumbai and were headed to villages in Unnao and Raebareli districts in Uttar Pradesh,” police officer T. S. Baghel told Anadolu Agency.

According to another official, the workers had paid 3,000 Indian rupees ($40) each to the truck driver due to unavailability of other transport.

Local news channel CNN-News18 reported the truck was packed beyond capacity with migrant workers, including women, and some of them even died of suffocation.

Many state governments are operating some special trains for the stranded workers but they are not enough to accommodate everyone.

The lack of options has forced thousands of workers to undertake arduous, and often fatal, journeys on foot.

Last week, 16 people were run over by a freight train in the state of Maharashtra.

All of them were migrant workers who fell asleep on the tracks while trying to walk to a railway station to catch a train.

India’s nationwide lockdown has been in force since March 24 and was recently extended until May 17.

The country’s COVID-19 tally continues to rise by the day, with 3,722 new cases taking the overall count to 78,003 on Thursday.

The figure includes 2,549 fatalities and 26,235 people who have recovered, according to the Health Ministry.

Incentives to speed up returns on Turkish rooftop solar