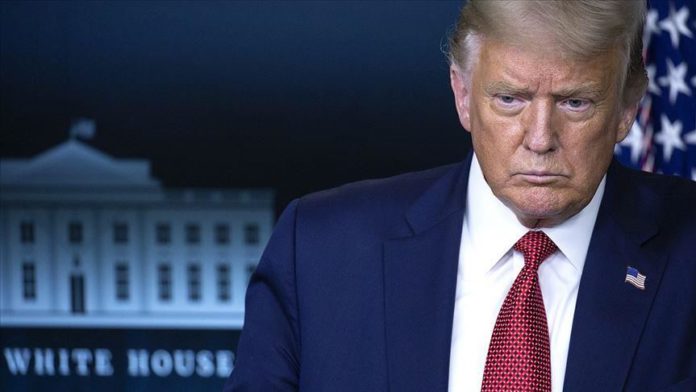 US President Donald Trump continued Tuesday to defend the actions of police officers involved in shootings, saying in a city that has been a flashpoint of protests over racial injustice that sometimes officers “choke.”

While touring Kenosha, Wisconsin, where officials say police shot Jacob Blake in the back seven times last week, Trump said officers cannot be threatened with having their pensions withheld or possibly being terminated from their positions for being involved in shootings.

“We have to condemn the anti-police rhetoric. It’s getting more and more, it’s very unfair. You have some bad apples. We all know that. And those will be taken care of through the system, and nobody is going to be easy on them either. You have people that choke,” Trump said, noting that officers are “under tremendous pressure.”

The comments mark the second day in a row in which Trump has said that officers occasionally “choke” on the job, leading to unwarranted and sometimes fatal shootings. He first compared the matter to golfers who miss a close putt during a Fox News interview Monday night.

Blake is unlikely to walk again after being shot by police last week.

A video that has circulated widely on social media shows Blake, 29, walking away from police as they attempt to apprehend him with guns drawn. A white police officer opened fire after Blake, who is Black, opened the driver’s side door of an SUV and began to enter the vehicle with his back facing two officers before one of them repeatedly opens fire.

The Wisconsin Department of Justice said last Wednesday that Blake told investigators he was in possession of a knife when he was shot.

The officers who shot Blake were not wearing body cameras, and Trump demurred when asked if all officers should be required to wear the recording devices.

Asked by a reporter about his comments that police occasionally “choke” on the job, Trump denied the existence of systemic problems in US policing, particularly as it concerns the Black community.

“I don’t believe that. I think the police do an incredible job,” he said.

In a follow-up question, Trump was asked if he believes in the existence of systemic racism in America, which he answered by saying “We should talk about the kind of violence that we’ve seen in Portland and here and other places. It’s tremendous violence.”

The president has long sought to frame himself as a “law and order” leader, staunchly backing police amid repeated outpourings of popular outrage over the police shootings of Black men.

The scenes of looting and rioting that dotted some of the protests in Kenosha largely faded after a man who prosecutors have identified as Kyle Rittenhouse, 17, fatally shot two people and seriously injured a third victim.

In denouncing the rioting that took place in Kenosha, Trump said “These are not acts of peaceful protests, but really domestic terror.”

Rittenhouse’s defense attorneys have said he acted in self-defense, a claim adopted by Trump, but a complaint filed by Kenosha County prosecutors said he opened fire on unarmed demonstrators.

In the court document, prosecutors say Rittenhouse first fatally shot Joseph Rosenbaum, a protester who threw a plastic bag at him and followed Rittenhouse into a parking lot where he tried to take away his long-barrel rifle.

Two other people were shot, including one fatally, as Rittenhouse was attempting to flee the scene of the first shooting.

A separate bystander video shows the suspect being chased by protesters before tripping and opening fire on protesters as they futilely attempt to take away his weapon.

He then gets up and walks away as screams of “medic” are heard in the background before he makes his way to police amid shouts of, “Hey, he just shot them.” Police, however, did not take him into custody.

Rittenhouse was arrested the following day in neighboring Illinois. He now faces multiple charges, including intentional homicide and attempted homicide.

US resumes patrol at oil reservoir in NE Syria