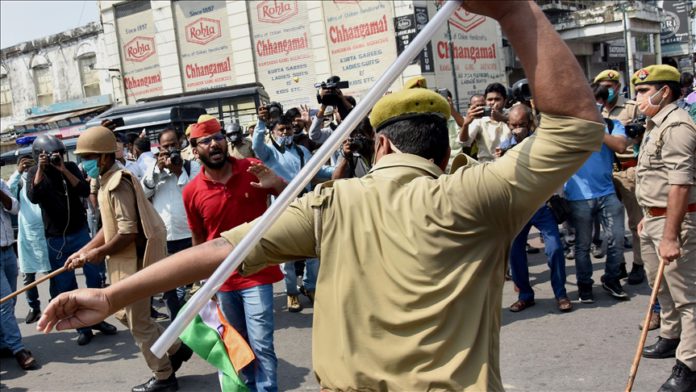 Video of a young man, 20, tied to a tree went viral last week.

He was being brutalized and his private parts were also attacked.

The incident occurred in the rural area of the Kanpur district in India’s northern state of Uttar Pradesh.

Attackers are seen asking the boy about his caste.

As soon as he said that he belonged to the Dalit, or underprivileged community, the attacks became more severe.

It is related to a relationship in which the young Dalit man had fallen in love with a girl from another caste. Police have made arrests in this case.

Another attack on Dalits occurred last week in Uttar Pradesh. Bullies created a ruckus in the Chandauli district in Barthara Kala village.

Young people belonging to the dominant community not only assaulted residents but allegedly assaulted women. When victims protested, their huts were set on fire.

The matter is related to a dispute with the Dalits on the boundary of a farm in the village.

When the dispute escalated, residents of the dominant group stormed the settlement and set fire to homes.

The matter came to light when video of the attack went viral on social media.

These are not isolated incidents.

Dalits are at the bottom of the Hindu caste system and are still subjected to untouchability.

Laws exist to protect Dalits but atrocities against the marginalized community have not decreased.

Dalit is a term used for those who were formerly known as “untouchables.”

They are often ostracized, leading to segregation and persecution by those in a higher caste.

India’s Constitution banned the practice years ago but Dalits are employed in professions considered demeaning to the upper classes, like cleaning sewers and toilets.

There are 200 million Dalits out of a population of 1.3 billion in India, according to one estimate.

Dalit leader Udit Raj said the outlook for Dalits remains bleak and the future is not any better.

“The way the government is privatizing everything, so the possibilities for Dalits are getting reduced. Now it is becoming difficult for Dalits to get jobs,” he told Anadolu Agency.

Raj believes opportunities for Dalits to move forward are being lost as reservation — reserving seats for lower classes, including Dalits, in government jobs, educational institutes and in legislatures — is being reduced after the government of Prime Minister Narendra Modi came to power.

The objective of reservation was to empower those from lower-class communities by providing jobs and opportunities to move ahead.

But Badri Narayan Tiwari, the author of several books, including The Making of the Dalit Public in North India, said the situation for Dalits is improving.

“Democracy is the only hope for the marginalized sections of society. And democracy means rationally distributing state resources among them and also empowering them. Slowly they are taking the benefit of the democratic state in India,” he told Anadolu Agency.

“Who can improve their condition better except democracy? So democracy is the only hope for them. Dalits are suffering in those places where feudalism still exists,” he said.