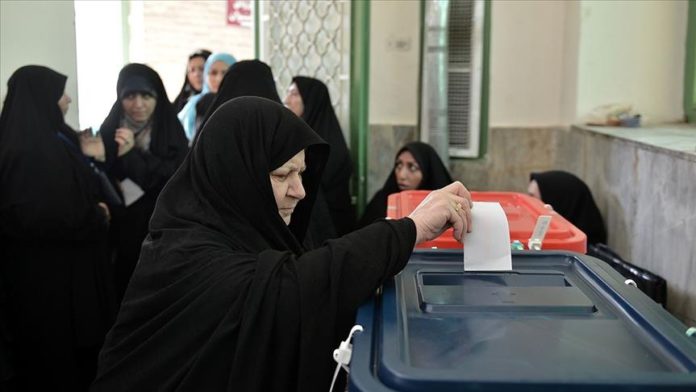 The third and final face-off between Iran’s presidential candidates, six days before the vote, was an animated contest of competing manifestos intertwined with acerbic attacks.

Centered around “people’s issues,” the debate saw five conservatives and two reformist hopefuls pitching ambitious plans, targeting the incumbent government and wrestling with each other.

Taking up where they left off, candidates held Hassan Rouhani’s reformist government responsible for myriad problems facing the country, from rising inflation, turbulence in the forex market, the coronavirus crisis, economic corruption and a lack of transparency to sanctions.

Even a reformist candidate, Mohsen Mehr-Alizadeh, criticized the incumbent government’s “interference in the stock market,” saying it should be “left in the hands of investors.”

Conservative candidate Ghazizadeh-Hashemi blamed the government for the “unfair distribution of resources among people” and challenged him to a live debate.

Alireza Zakani, a conservative, termed a sharp rise in inflation a “catastrophe,” pledging to bring it down. He said the government was banking “on the pockets of people.”

Fellow conservative Saeed Jalili said sanctions must be “neutralized,” questioning the “negotiating strategy” of the government and describing the 2015 nuclear deal as faulty.

Ebrahim Raeisi, who has been leading in opinion polls, said the bureaucratic system “needs to be rectified,” including fighting corruption and red tape.

Former top banker and reformist candidate AbdolNaser Hemmati, in defense of the government, blamed “sanctions” for the country’s economic woes.

He also took digs at conservatives, saying they want the country to remain isolated from the rest of the world by paving the way for sanctions.

Candidates also fired acerbic salvos at each other, in particular, Hemmati hitting out at Raeisi and Zakani taking on Hemmati.

Hemmati urged Raeisi to issue orders, as the judiciary chief, for lifting social media filters, while Zakani flashed a letter showing Hemmati endorsing the decision of fuel price hike in 2019, which led to unrest and killings.

Iran goes to polls June 18 with speculation that the disqualification of key reformist figures could affect the turnout.

According to opinion polls, top conservative figure Raeisi is leading the race by a huge margin.