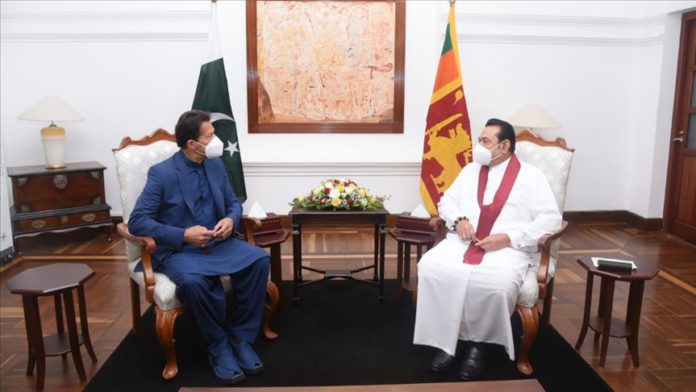 The two-day visit, they believe, could turn into a strategic partnership if the island nation accepts Islamabad’s invitation to join the multi-billion-dollar China-Pakistan Economic Corridor (CPEC), the flagship project of Beijing’s Belt and Road Initiative (BRI).

The two countries have agreed to further strengthen bilateral relations in diverse areas, including trade, and tourism through enhanced connectivity.

“This visit has its own significance as it took place at a time when diplomatic relations between Colombo and New Delhi are strained,” Rafiuzzaman Siddiqui, a former Pakistani diplomat, told Anadolu Agency. “At the same time, India has left no stone unturned to isolate Pakistan regionally and internationally.”

Both nations, he said, have several commonalities, which strengthen the chances of enhanced cooperation, especially in trade and defense.

“Both are victims of terrorism and have dealt with it effectively, if not fully overcome,” he said, referring to Sri Lanka’s 26-year civil war, as well as Pakistan’s war against militancy following the US invasion of neighboring Afghanistan in 2002.

“Pakistan’s interaction with Sri Lanka at this juncture will send a message that it is not isolated, but internationally and regionally very much relevant,” argued Siddiqui, whose last assignment was to serve as Pakistan’s high commissioner to Bangladesh.

Islamabad and Colombo enjoy warm relations, with particularly close military training cooperation during the later stages of Sri Lanka’s conflict with the separatist Tamil Tigers, which ended in 2009. The Liberation Tigers of Tamil Eelam was demanding a separate state for ethnic minority Tamils in the country’s north and east.

Sri Lanka was also a part of the Aman-21, a multinational naval exercise hosted by Pakistan in the Arabian Sea earlier this month.

Abdul Khalique Ali, a Karachi-based political analyst, said India has tried its best to isolate Pakistan by weakening the South Asian Association for Regional Cooperation, a regional intergovernmental organization of South Asian states, and creating sub-groups like the Bay of Bengal Initiative for Multi-Sectoral Technical and Economic Cooperation, excluding Pakistan. “This visit signals it has failed,” he said.

Ties between New Delhi and Colombo remain strained as the former demands implementation of the 13th Amendment of Sri Lanka’s Constitution to ensure devolution of power in its Tamil-majority provinces.

Signed in 1987, the law was the outcome of a bilateral accord to improve relations between Tamils and the majority Sinhalese.

Siddiqui said Colombo cannot pull something extra out of its bag to align itself with Islamabad against New Delhi.

“By and large, Sri Lanka will maintain a balanced approach vis-à-vis India and Pakistan. Although it cannot deny the largeness of India, it did not take dictation from New Delhi against other smaller nations,” he said, adding that Colombo may consider joining CPEC.

Seconding the argument, Ali said Sri Lanka is balancing its ties and “doesn’t want to rile up India,” which had initially armed the Tamil rebels.

“This visit is a message to India as Sri Lanka needs China and Pakistan’s diplomatic support on this matter,” he said.

Maliha Zeba Khan, an assistant professor of International Relations at the University of Modern Languages Islamabad, however, said there is no connection between Khan’s visit and soured relations between Sri Lanka and India.

She also ruled out the possibility of the South Asian country’s inclusion in CPEC as it is already a part of the BRI. “We should consider it a routine visit, considering the fact Pakistan and Sri Lanka have been good friends.”