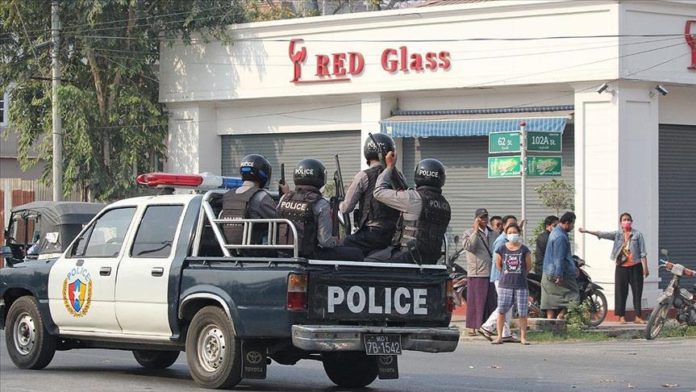 If the International Court of Justice (ICJ) allows Myanmar’s military regime to become part of the Rohingya genocide case, then it must clarify that this “does not provide a basis for legitimizing the junta,” legal experts said.

The ICJ, the top judicial body under the UN, has been hearing a case brought by the Gambia in November 2019, accusing Myanmar of violating the Genocide Convention in its brutal crackdown on the Rohingya community.

Tens of thousands of Rohingya were killed and thousands of women and girls were raped when Myanmar forces launched a crackdown on the minority Muslim community in Rakhine State in August 2017.

More than 1.2 million Rohingya, described by the UN as the world’s most persecuted people, were forced to flee Myanmar and continue to live in refugee camps in Bangladesh.

Progress on the case filed by the Gambia against Myanmar for violating the Convention on the Prevention and Punishment of the Crime of Genocide has been slow.

Last January, the New York-based Global Justice Center said the ICJ’s final ruling would be delayed by at least a year as the court would hear arguments and preliminary objections filed by Myanmar.

The ICJ recently announced that it will resume hearings from Feb. 21-28.

Myanmar was previously being represented in the case by former State Councilor Aung San Suu Kyi, who was overthrown in a military coup last February and has been jailed by the junta on various charges.

The junta will now participate in the ICJ hearings starting next month, raising questions of legitimacy.

“The ICJ has no jurisdiction to decide who lawfully represents Myanmar,” Erin Farrell Rosenberg, a legal expert, said during a discussion on the issue on Thursday hosted by Forces of Renewal for Southeast Asia (FORSEA), a representative body of rights campaigners and activists in the region.

The only thing that the ICJ has the power to decide is “whether Myanmar has breached the Genocide Convention,” according to Rosenberg, a legal policy advisor at the Mukwege Foundation in the Hague.

“However, the concern is whether the decision by the ICJ (to allow the junta to take part in the hearings) will be used opportunistically by the junta as a reason to be recognized as the legitimate representative of Myanmar,” she said.

She stressed that the ICJ’s decision to proceed with the hearing “should not be understood as having broader implications and does not provide a basis for legitimizing the junta.”

To ensure this, she urged the top UN court to “be transparent.”

“Potentially, at the hearing itself, make explicit that its decision to permit junta to participate in the ICJ proceedings on behalf of Myanmar in no way confers legitimacy on the junta in any other context,” Rosenberg said.

“If the court itself does not say this, I would encourage the Gambia to put this on record, not to challenge the junta’s role, just simply to state it.”

Precedence could be fatal to Gambia’s case

On the possible outcome of the case, Gregory Stanton, a professor and expert in genocide studies, warned that the ICJ has set precedence in previous cases that could go against the Gambia.

In two genocide cases related to Croatia and Bosnia, the ICJ “laid down rules of law that could be fatal to the Gambia’s case against Myanmar,” he said.

“The ICJ in these two cases held that genocide has to be the only intent of a state for it to be found in violation of the Genocide Convention,” he said, terming it “an absurd rule of law.”

In the Rohingya case, he explained, “if the ICJ finds the intent was forcible displacement which is ethnic cleansing, then they (Myanmar) can’t be found to be in violation of the Genocide Convention.”

“This could be fatal for the Gambian case,” warned Stanton, who is the founding chair of the US-based Genocide Watch.

He said the ICJ can give a verdict in any scenario and is not obligated to allow the Myanmar junta to participate in the hearings.

Need for consistency in ICJ conduct

John Packer, professor of international conflict resolution at the University of Ottawa, said the issue at the ICJ is “of the effectiveness of a (junta) government and its capacity to be held responsible.”

“The ICJ statute does not define the exact procedural mechanism for deciding such a (representational) dispute, but it does not confer competency on the court to decide on its own such a decision,” he said.

“The ICJ is duty-bound to follow ‘in accordance with the law,’ i.e. international law, which is the UN Charter,” he explained.

He said such concerns and questions regarding representation “were not new,” citing examples of Germany and China, who were recognized as “single states” many years after World War II.

Packer said the case was not one about a dispute between two neighboring states, as the “the sole position of the Gambia is in the public interest of the international community and it has no other interest.”

“It is not imperative the case is decided in a month or a year,” he said.

Instead, he called for consistency from the ICJ “in its conduct as a body serving under the UN charter.”