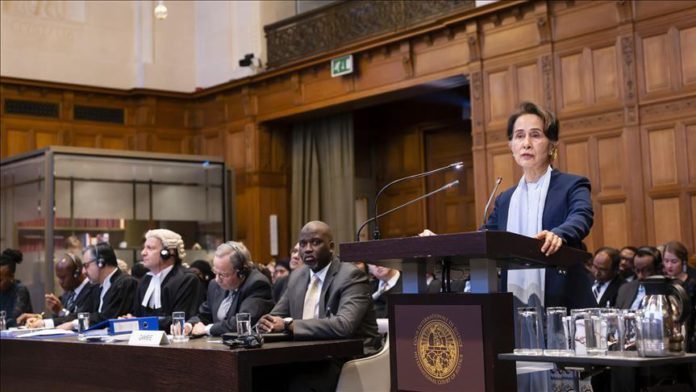 The genocide lawsuit against Myanmar currently being heard at the UN’s highest court can be an effective tool to put “powerful” pressure on State Counsellor Aung San Suu Kyi administration to speed up the peaceful and dignified reparation of Rohingya to their home country, said a top legal expert.

In an interview with Anadolu Agency, Michael Becker, former associate legal officer at the Netherlands-based International Court of Justice (ICJ) said the legal process can encourage global actors to adopt “different and harsher strategies” including “economic sanctions” against Myanmar.

In a landmark interim verdict early this year, the highest court ruled that it has the authority to consider a genocide case against Myanmar and approved emergency “provisional measures” compelling Myanmar to halt persecution against Rohingya, including killing, raping, and destroying homes and villages.

Filed by the West African nation of the Gambia last year in November, the lawsuit blames Myanmar for carrying out genocide against the hapless Rohingya community.

“The ICJ case that the Gambia has brought can and should be part of a broader political strategy aimed at creating the changes that are needed in Myanmar to make it possible for the Rohingya to return to Rakhine and to live safe and dignified lives,” said Becker.

The legal expert, who now teaches law at the Trinity College Dublin, Ireland, said that such an international judicial process will encourage global actors to act against Myanmar, adopting harsh measures including imposing economic sanctions.

He further said that it will lead even multinational companies to review their relations with Myanmar.

“Gambia is going to rely heavily on the investigations that have already been undertaken by third parties — namely, the UN Fact-Finding Mission, but other third-party sources, as well, “he added.

Last year in October, the head of the UN Independent International Fact-Finding Mission on Myanmar, Marzuki Darusman, told the General Assembly that Myanmar is failing in its obligations under the Genocide Convention to prevent, to investigate and to enact effective legislation criminalizing and punishing genocide.

On the future judicial process, former ICJ officer said the satellite imagery coupled with photographic and video evidence from inside Rakhine state, as well as extensive testimonies from the witnesses living in camps in Bangladesh, will be the main pieces of evidence in the during the hearings.

Becker, however, said that there was a big question on how much weightage the ICJ will give to the findings of the UN Fact-Finding Mission.

On the role of China, he said it was a vital factor as Beijing’s veto at the UN Security Council will complicate efforts and collective actions aimed at enforcing the Court’s decision, in case it goes against Myanmar.

“The much more difficult challenge for the Gambia is to prove to the ICJ that these acts of violence took place with genocidal intent – that is, the intent on the part of the perpetrators to destroy in whole or in part the Rohingya, “he added.

After three years it may also be tougher to prove genocide charges against Myanmar. But this would arguably be a major challenge even if investigators currently had access to Rakhine.

Despite frequent requests from international platforms including the UN to allow investigators to visit Rakhine state, the place of August 2017 military crackdown, there has been no positive signal from Naypyidaw till the date.

Becker also emphasized the proper use of Facebook evidence in proving crime charges against Myanmar.

“The idea is that the material that Facebook took down — because it violated Facebook’s policies in one way or another — will help to show that the Rohingya were targeted as part of a campaign bent on their destruction and that these acts of violence were not undertaken for some other reason,” said Becker.

He said another material for the Court could be the report of Myanmar’s own Independent Commission of Enquiry. Thought the full report of the comission has not been released, its executive summary with some of the supporting annexes was published in January.

The former ICJ legal officer said there was apprehension that Myanmar may attack the credibility and accuracy of information gathered by the UN Fact-Finding Mission. To face this challenge, he said, Gambia’s legal team needs to be prepared to defend the methods and choices of the Fact-Finding Mission.

He urged the petitioner to work towards calling witnesses to appear before the ICJ, which may include displaced Rohingya as well as individuals who were involved in the on-the-ground investigation of the alleged atrocities.

Becker said while the ICJ judgments are legally binding, but their enforcement is subject to a political process.

Asked about the significance of judgment for Rohingya, while Myanmar is not part of “Rome Statute” the former legal officer said the ICJ is not about prosecuting or handing over punishment to individuals.

“The ICJ case is about the responsibility of Myanmar — as a stat– for its alleged violations of the Genocide Convention, “he added.