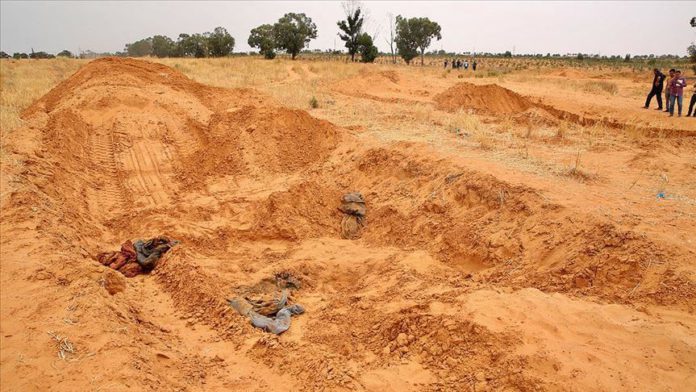 “These findings may constitute evidence of war crimes or crimes against humanity,” said Fatou Bensouda of The Hague-based court of the information.

Following the liberation of territories once held by warlord Khalifa Haftar’s militants in the city of Tarhuna and its surroundings, many mass graves were unearthed, and Libyan officials urged international judicial authorities to take action.

“I call on the Libyan authorities to take all the necessary measures to protect and secure the mass grave sites and to ensure that all actions taken in this regard are conducted in a manner that will not prejudice future investigations,” she said.

Bensouda also praised a decision by Antonio Guterres, the UN secretary general, offering support in this regard, adding that ICC looks forward to cooperating with the Libyan authorities, the UN, and all relevant partners working to investigate this “evidence of potential atrocity crimes” in Tarhuna.

“In addition, I reiterate my concern at the grave escalation of violence and the high numbers of civilian casualties, reportedly largely resulting from airstrikes and shelling operations.”

She also expressed her grave concern over a marked increase in the amount and quality of military equipment recently deployed in the country.

She called on all parties and armed groups involved in Libya to fully respect the rules of international humanitarian law.

Bensouda called on all commanders to take all required measures to comply with their individual duty to prevent and punish crimes by subordinates under their effective command or control.

Saying that Libya continues to be a “priority” at the ICC, Bensouda added: “I will therefore not hesitate to expand my investigations and potential prosecutions to cover any new instances of crimes.”

The UN Human Rights Council adopted a resolution on Monday ordering a “fact-finding mission” to Libya in order to document violations and abuses committed since 2016.