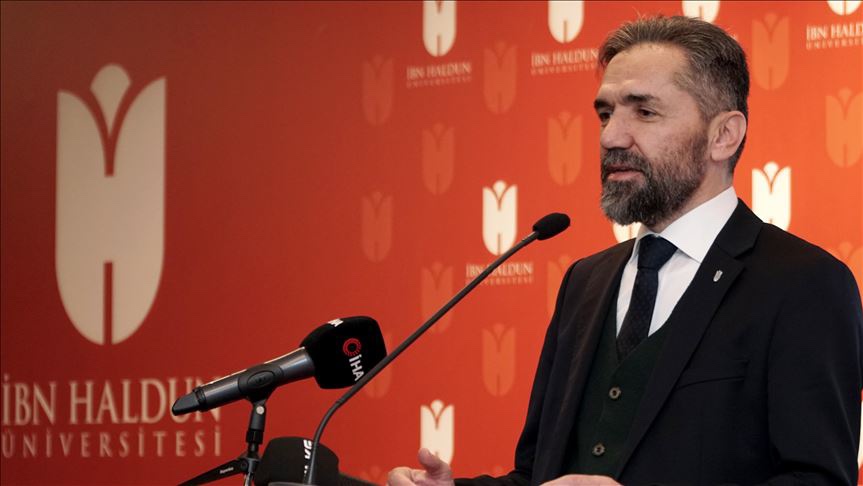 Abd al-Rahman Ibn Khaldun, a 14th-century Muslim philosopher, is not only a pioneer in social sciences, but also an alternative, according to Recep Senturk, the president of the Ibn Haldun University in Istanbul.

This week Turkey marks the 668th birthday of Ibn Khaldun, a pioneer in modern disciplines of historiography, sociology, economics and demography.

But Senturk opposes the idea of viewing Khaldun as only a pioneer in social sciences because he said it reduces his importance.

“To see Ibn Khaldun as a historical figure is to make him dysfunctional for today,” said Senturk.

“To see him only as a pioneer of modern socialism means that he has no significance today, but of historical significance. To historicize and glorify him in this way will make him a person, a scientist, whose ideas cannot be used in the process of understanding current social events,” he said.

Senturk said the Ibn Khaldun community established in 2006 at the university holds international symposiums biennially to apply the works of the renowned philosopher to the modern world.

“Those who will speak in this symposium do not praise Ibn Khaldun or talk about his life and thoughts, but they analyze his concepts, theories, and methods from a Khaldunist perspective. They will show how Ibn Khaldun still helps us understand the economy, politics, religions and cultures in the modern world and in which aspects his approaches are stronger than others,” Senturk added.

Comparing Ibn Khaldun to German philosophers Friedrich Hegel and Karl Marx, Senturk said Hegel has an ideologist approach to society and Marx has a materialist one.

“Each one focuses on one layer of the entity. However, Ibn Khaldun analyzes both the material dimension and the ideal dimension of the society together. He does not fall into reductionism, thereby producing a more comprehensive study,” said Senturk.

In this respect, understanding Ibn Khaldun has the potential to make a serious contribution to modern academy, Senturk contends.

Ibn Khaldun analyzed history with its visible and invisible sides, according to Senturk, who stressed the visible side included a narrative, a story, a report or a collection of news, while the invisible side of history includes explaining events with cause and effect relationships and eliciting historical reports.

Ibn Khaldun’s contribution to the science of history, Senturk said, is that he studied it in a circular perspective, not a linear one.

“In the modern west, there is a linear perspective according to the evolutionist approach. [Auguste] Comte suggests the advancement of thoughts – from language to metaphysical thought, and then to science. According to Marx, the means of production progress and evolve, there is a transition from slavery to feudalism, capitalism, and socialism,” he said. “However, Ibn Khaldun adopts circular progress and rejects the evolutionary one.”

Senturk said Ibn Khaldun studied society as a constantly changing structure in two types. One is a rural nomadic society and the other is a settled civilization in the city.

Thus, social solidarity weakens and they cannot defend themselves when another nomadic society attacks and they are defeated.

“When we look at the relationship between the center and the environment, the ruling elites are the ones who hold the power and there are people out of the political power. Therefore, the dialectic of the center and the periphery still works today,” he said.

Students need to be intellectually independent

“While we teach modern positivist theories and approaches to our students, we also offer our students approaches from Islamic civilization and other civilizations. They have the opportunity to make their own choices by comparing the East and the West,” he said.

“Our goal is that our students become intellectually independent. Giving students one-sided thinking is not education, it is not only by learning the existing theories but also by gaining the capacity to produce their own theories,” he said.

Senturk went on to say social theories imported from the West are insufficient to analyze Turkey’s social structures.

“Those theories emerged in a very different cultural and social environment, in a political and economic structure. At this point, we need to update ourselves with contributions from Ibn Haldun and many other scholars like him.

“We have to look at the horizon from the shoulders of giants in our history and see what other people can’t see,” he said.