TurkishPress
Home News I woke up to world with no smell, says COVID-19 patient 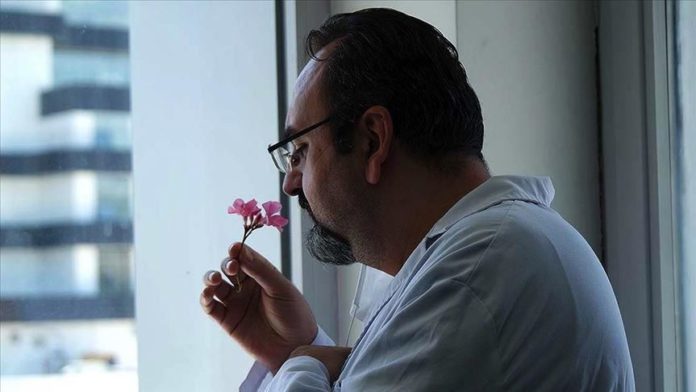 A Turkish doctor, who has recovered from the novel coronavirus, said he woke up to a world with no smell one day, recalling his days of fighting the disease caused by the virus.

“I woke up one morning and said, ‘The world has no smell’. It has been around two months since I recovered from the infection, however, almost all details of the world still have no smell for me,” Ugur Duman, a doctor at Bursa Yuksek Ihtisas Training and Research Hospital in northwestern Turkey, told Anadolu Agency.

Duman, 44, said there is just small recovery in his sense of smell which is not up to the desired level.

He said that the symptoms of the disease can differ from person to person, and it started with mild cough for him.

Noting that he took the symptoms serious as he has a heart problem, he said: “It started with a very mild cough, which I would not take serious if we were not in the pandemic situation.”

After examination, Duman said, there were findings in his lung and he tested positive for COVID-19 the same day.

Starting the treatment first at hospital and then switching to his house as he could isolate himself there, Duman said he received a five-day medication treatment followed by 14-day isolation period.

“When I was sick, the thing I felt the most was loneliness. You need to be isolated from everything, everyone, all your beloved ones,” he said, adding it is the most disturbing thing during the process.

He noted that loss of sense of smell left the “permanent effect” of the disease on him.

Duman also highlighted that the disease spreads so fast and easily, and underlined the importance of keeping social distance and avoiding contact.

He said the social life should continue but with special measures in place.

“The most important thing among our personal protection measures is the mask. It is a simple paper mask, but it provides great protection,” he said.

Duman also warned the young people of variable findings of the disease and said: “Nobody should trust their youth.”

He added that there is still no clear information on the long-term effects of coronavirus in human body.

The pandemic has killed over 606,200 people worldwide, with more than 14.5 million confirmed cases, according to figures compiled by US’ Johns Hopkins University. Over 8.13 million people have recovered from the disease.