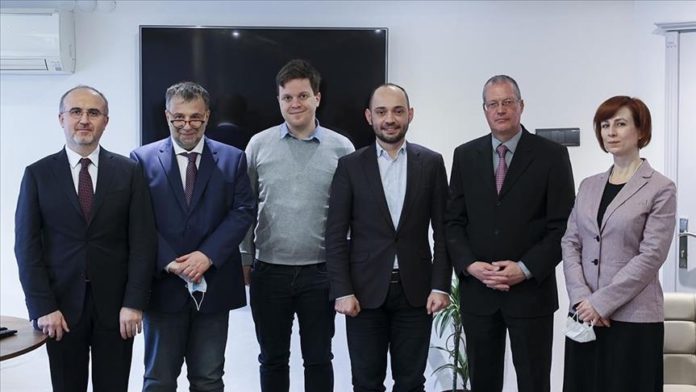 A group of journalists from Hungary paid a visit to the headquarters of Anadolu Agency, Turkiye’s premier news source on Monday.

Noting that Hungary has special historical importance for Turkey, Ozhan said that with the presence of the Anadolu Agency in the country, the news traffic continues to be transmitted to the international arena and Turkey in the strongest way possible.

Highlighting that the presence of Turkish companies in Hungary offers many advantages such as improving the living standards in the environment they are in, and strengthening the relations between communities, Ozhan said that they are pleased with the rapid increase in the interaction between the media organizations and journalists of the two countries.

For his part, Bayraktar noted that Anadolu Agency is in cooperation with international agencies, and added that half of the news in the press in Turkey is produced by the agency, and photographs taken by agency reporters are published almost every day in international media including the Guardian and Washington Post.

Bayraktar also informed Hungarian press members about the agency’s News Academy and its programs such as War Journalism Training Program and Online Journalism.

Journalists in the Hungarian press delegation mentioned the importance of the role of the media, especially the Anadolu Agency, in strengthening the relations between the two countries.

Hungarian journalists asked questions about the objectives of the Anadolu Agency, the coverage of Hungarian news, the press activities in Turkiye, the issues that are at the forefront of the world and regional agenda.

The journalists also noted the importance of increasing mutual visits and exchange of views between the Turkish and Hungarian media members, evaluating professional experiences, and intensifying contacts on journalism.

Founded in 1920, Anadolu Agency is a leading global news agency operating across the world. It serves subscribers in more than 100 countries, including in the Americas, Europe, the Middle East, Asia, and Asia-Pacific.