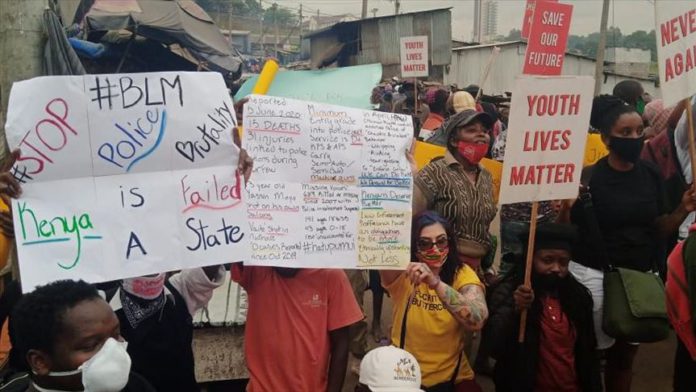 Hundreds of Kenyans on Monday flocked to the Mathare slums to protest the fatal police brutality to enforce coronavirus mitigation measures across the country.

The crowds marched around the slum calling for an end to police violence, which has left more than 20 people dead and numerous during the curfew, and they often made stops at locations where innocent people were gunned down by police.

“At every location where someone was gunned down, we kneel and honor them, then we proceed with the march. We have been to all locations in Mathare slums where people were killed not by coronavirus, but by police who claim they want to protect us from the pandemic,” Collins Odhiambo, an organizer of the march, told Anadolu Agency.

“This is just coinciding with the black lives matter protests but ours is a fight with the police, you would rather deal with armed thugs than the Kenyan police, thugs will rob you without killing you, police brutality is a formality.”

Cynthia Ochieng, a relative of 40-year-old Maurice Ochieng who was beaten to death by police for not wearing a protective face mask in public, told Anadolu Agency: “We have at least 30 people who are protesting today and have lost their loved ones to the coronavirus police shootings.

“Finally our voice is being heard, we are in slums but the whole world will hear our cries just like they heard George Floyd.”

The protesters, with rights activists among them, concluded the protest at the house of 13-year-old Yassin Moyo who was gunned down by police just after curfew started. Moyo was at the balcony of his home when a police officer shot him for not being in the house.

As soon as they left Moyo’s house, police used tear gas to disperse the crowd.

The Independent Policing Oversight Authority, the only authority that holds police accountable for crimes in Kenya, said it has received 87 complaints since the end of March, documenting 21 cases where people were killed. Six Kenyan police officers suspected of murder and assault while enforcing the countrywide coronavirus curfew have been charged.