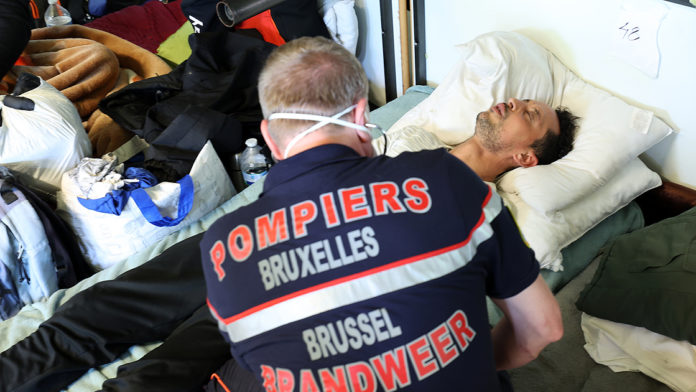 Hundreds of so-called “undocumented” migrants in Belgium are seriously ill as they continue a hunger strike for more than a month, with some “stitching their mouths shut” to signal there is no going back.

Nearly 150,000 migrants have been living in the country for years without legal residency or working papers.

About 400 have been living in a church and a university campus in the center of Brussels for six months to make their voices heard by the government.

Migrants, who have been on a hunger strike for 40 days, are demanding the government make legal arrangements for them to be given legal status.

The situation of the undocumented population who came to Belgium from Algeria, Tunisia, Afghanistan, Pakistan, and many African countries has been a topic of discussion for years.

The undocumented previously staged hunger strikes in 2000 and 2009 and their demands to be legally included in the system were met by authorities.

Migrants, who are making the same demands and taking support from socialist and environmentalist political parties, are facing major obstacles this time as the current government follows a very strict attitude and strongly rejects their demands.

The hunger strikers have not given up on their demands.

Ahmed, a spokesman for the hunger strikers, said that a suitable solution must be found and immigration laws must be rearranged according to the current political and economic reality in Belgium.

“We have been working in Belgium for many years, but there is not any law that protects us from work accidents. We do not have social security,” he told Anadolu Agency.