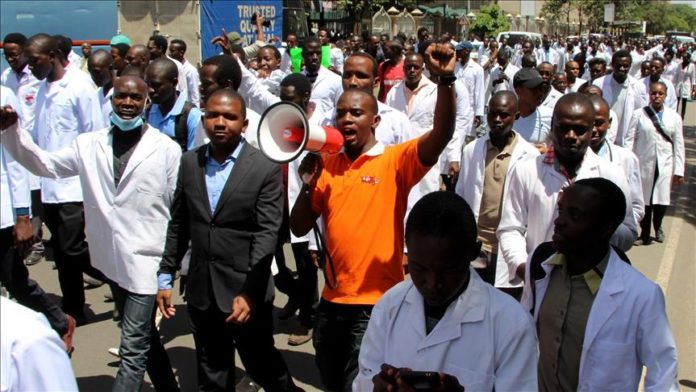 At least 500 health workers protesting for better working conditions in southeastern Kenya have been fired from their jobs, local media reported on Tuesday.

The workers, including nurses and clinical officers, were sacked in Taita-Taveta County “after they declined to return to work” despite orders from government officials, according to daily The Nation.

The medics were among thousands protesting in the country over multiple issues, such as lack of protective gear during the COVID-19 crisis, and demanding improved work conditions, including health insurance.

The protests have now continued for over a month, seriously crippling Kenya’s public health system and the country’s fight against the pandemic.

Officials in Taita-Taveta told the protesting health workers that “the matter was being addressed at the national level” and issued them a show cause notice before dismissing them from their jobs, the report said.

“The public service board has already initiated the replacement process. We want normal operations in our health facilities to resume immediately,” John Mwakima, health executive for the county, told the newspaper.

“Our people are suffering. I have received many distress messages from residents who are unable to get treatment. That is why we are working to ensure that services resume by next week.”

The Kenya National Union of Nurses (KNUN) has vowed to mount a legal challenge against the decision in Taita-Taveta.

In a statement on Tuesday, the union said Kenyan citizens who cannot afford treatment at private hospitals have been expose to “more sufferings” because nurses and other health workers in the public secort “have been totally neglected.”

“We advise our members to stay put as we await [the] signing of an agreement that will provide a permanent solution,” said KNUN, reiterating that its 23,000 members will not resume work until their grievances are addressed.