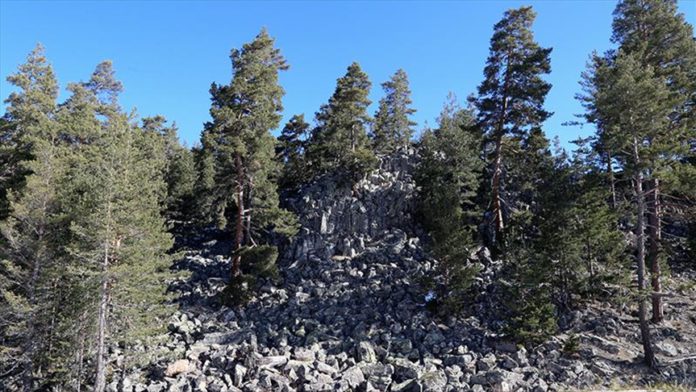 Hundreds of rare basalt columns resulting from lava flows that crystalized as they cool have been found in northwestern Turkey, creating a stunning landscape of geometric shapes jutting out of the hillside.

Found near a highway in the province of Bolu, the geological and geomorphological formations near the constitute evidence on the history of the earth’s crust that need to be researched, said Mustafa Arslan, the regional head of the Forestry Research Institute.

Speaking to Anadolu Agency, Arslan said the columns formed from volcanic rocks such as basalt source-granite and andesite. “The features of this place are very different. Normally, basalts can be seen on Earth as large boulders or large blocks. When we pay attention to the formation here, we see columns.”

“For these to occur, a specific process is needed under appropriate temperature and pressure,” he explained, with columns forming as cracks in the Earth cool down and contract from the surface to the depths over centuries of time, a process which affects the thickness of the blocks and columns.

Underscoring the scarcity of basalt geological formations in nature, Arslan said that these are considered geo-sites, also known as Geoheritage, and should be preserved as they depicts a certain period in time.

“In the formations here, we can see basalt columns with a diameter of about 50-60 centimeters [approx. 20-24 inches] and a height of 15-20 meters [approx. 16-21 yards],” he said, adding that part of these columns were buried underground and continuing to form.

“If it’s declared as a geo-site, then visitors will have the opportunity to see the structures here and this would contribute to science through scientific studies,” he added.

In other parts of the world, basalt columns can be seen in Northern Ireland, Scotland and California, while they are also seen in northern Bartin province of Turkey.