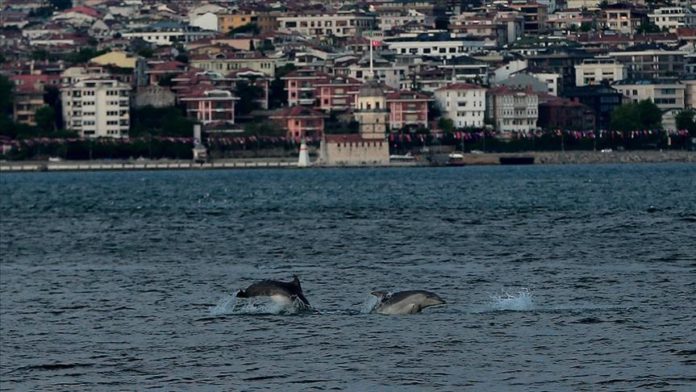 Dolphins are not to blame for a recent drop in the stocks of hamsi – a small anchovy-like fish – in waters around Turkey, according to biologists.

Last Friday, Turkish officials announced a 10-day ban on the fishing of hamsi to help stocks of the popular fish recover from sharp drops.

“The main reason for the fall in fish stocks in the sea is the human factor. Dolphins are an important part of the marine ecosystem. Nobody can hunt dolphins,” Arda Tonay, a marine biologist at Istanbul University, told Anadolu Agency.

In line with the fisheries act and international treaties Turkey is a party to, dolphins have been under protection since 1983.

“Since dolphins are not fish, they cannot spawn millions of eggs and reproduce like fish,” said Tonay, who is also deputy head of the Turkish Marine Research Foundation.

“Dolphins, like us, are mammals that produce one calf a year, carry it in its belly for months, and breastfeed it. They don’t give birth to another calf until it’s grown up. So the numbers of dolphins can’t rise very much.”

Tonay stressed that reopening dolphin hunting – as some have called for –is neither legally possible nor scientifically wise, as dolphins are a pillar of marine ecosystems.

“Overfishing, pollution, and mistaken fishing policies cause falls in fish stocks. We need to regulate these in order to prevent falling fish stocks,” he said.

Tonay said media reports about dolphins eating 70 kilograms (154 pounds) of fish are both unfortunate and incorrect.

“Since dolphins are a part of the marine ecosystem, they will of course eat fish. Dolphins eat fish between 2% and 5% of their own weight, if they find it,” he explained.

He underlined that considering that a 40-meter (131-feet) fishing boat can catch 50-60 tons of hamsi at a time, focusing on how much a dolphin eats is pointless.

“It is unacceptable to target dolphins as the reason behind the drop in hamsi stocks,” he concluded.