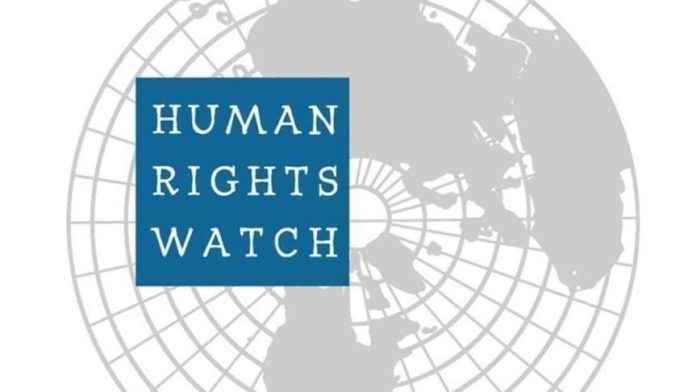 Human Rights Watch appealed Monday to Congolese authorities to immediately and unconditionally release two youth activists who were arrested after taking part in a peaceful demonstration against insecurity in eastern Democratic Republic of Congo.

Elisée Lwatumba, 22, and Eric Muhindo, 32, members of the youth movement Struggle for Change (Lutte pour le Changement), were arrested on April 19 this year after taking part in demonstrations in the city of Butembo in North Kivu province and charged with “inciting civil disobedience” and “threats of attack.”

Pending trial, the duo faces up to five years in prison, according to their lawyer.

The protests, which had begun on April 5 and spread to the cities of Goma, Beni and Butembo in North Kivu, were organized to denounce the perceived failure of the authorities to stop the killings of civilians by armed groups in Beni territory.

The protestors also demanded that MONUSCO, the UN peacekeeping mission, should leave Congo apparently due to inaction to protect civilians.

“Congolese authorities should immediately and unconditionally release two activists who were arbitrarily arrested on April 19, 2021 after peacefully demonstrating in eastern Democratic Republic of Congo,” Human Rights Watch said in a statement.

The arrest in North Kivu province of the two activists has been viewed as part of a government crackdown on pro-democracy groups, the media and other dissenting voices which has been tightening since early 2020, according to activists.

“The arbitrary detention of Elisée Lwatumba and Eric Muhindo is a worrying reminder that peaceful protesters are still at risk in Congo,” said Thomas Fessy, senior Congo researcher at Human Rights Watch.

“The authorities should demonstrate their commitment to freedom of expression by immediately releasing both activists and dropping the charges against them.”

The duo is being held at Butembo’s central prison.

On July 13, DR Congo’s human rights minister Fabrice Puela told reporters he had discussed their case with the chief of military justice “to see how to obtain their provisional release.”

“The Congolese government continues to target activists who raise uncomfortable truths and advocate for peace and justice,” Fessy said.

More than 1,250 civilians have been killed in suspected rebel attacks in Beni territory since the start of a major military operation in October 2019, according to civil society groups.