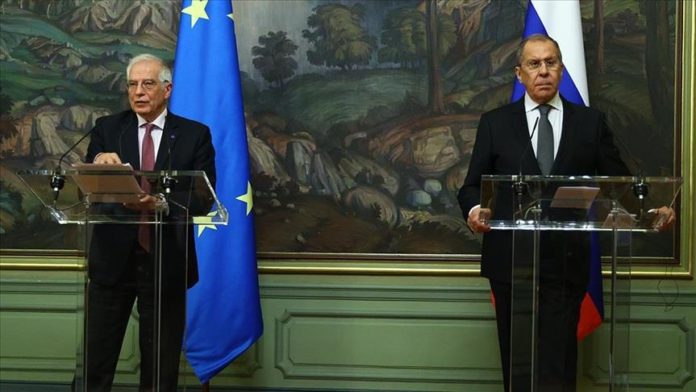 Russian, EU top diplomats discussed the observance of human rights during protests in Russia, Europe, and the US as well as the Navalny case at a meeting in Moscow on Friday.

Speaking at a news conference in Moscow, both Russia’s Sergey Lavrov and EU’s Josep Borrell said they had disagreements on a number of topics.

“I conveyed to Mr. Lavrov my deep concern over the Navalny case and reiterated my call for Navalny’s release and for an impartial investigation into his poisoning,” Borrell said.

Asked about possible sanctions against Russia over the Navalny case, Borrell said as of today no EU state made such a suggestion, but the discussion will continue at March’s meeting of the EU Council of Ministers.

“My visit to Moscow is part of a preparatory work for the meeting, where we will further discuss our strategy in regard to Russia,” he said.

For his part, Lavrov pointed out the EU’s “double standards” during protests, saying police in the EU and US act much tougher — use rubber bullets, tear gas, and physical assault to disperse demonstrations, while in Russia no such means were applied.

“The coverage is biased too. Covering protests in Russia, the Western media shows how police react, but not what provoked such a reaction, while in the West [the media shows] the excesses of the protesters,” he said.

As for possible sanctions, Lavrov said Russia considers the EU as an “unreliable partner”, which is “more and more resorting to unilateral restrictions that have no legitimate basis.”

However, Lavrov said both sides confirmed their interest in maintaining and expanding the channels of dialogue, including on issues where positions differ.

“We noted our readiness to cooperate pragmatically where it is interesting and beneficial for both sides. We have a common opinion that further degradation of relations would result in negative and very unpredictable consequences,” the minister said.

Borrell congratulated Russia on the Sputnik V vaccine, which recently got a positive report in the international medical magazine Lancet.

“I was pleased to read a report published in the prestigious scientific journal The Lancet regarding the Russian vaccine [Sputnik V] and its high efficacy. I hope that now the European Medicines Agency will be able to certify this vaccine for use in the EU member states. As you know, we have lack of coronavirus vaccine in the EU,” he said.