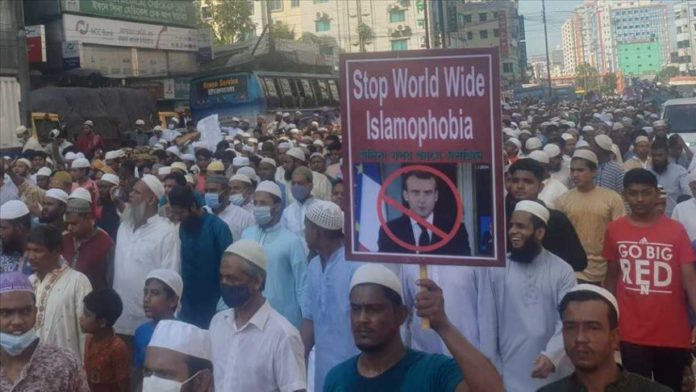 Following Friday prayers, hundreds of thousands of Muslims in Bangladesh and Pakistan took to the streets in protest of anti-Islamic measures and rhetoric by France.

Imams at mosques on Friday also gave special sermons and guidelines on how to react to Islamophobia in the Western world, especially in France, asking Muslims to “obey the prophet’s teaching of respecting others’ religious faith and keep peace and order in society.”

The biggest procession in Bangladesh originated from the Baitul Mukarram National Mosque in Dhaka, joined by hundreds of thousands of Muslims from nearby mosques.

“We urge the government to convey our anger to France and boycott French products until France offers a public apology for what it has done to Muslims,” Akramul Haque, a protester, told Anadolu Agency.

Eid Milad-un-Nabi, the birthday of the Prophet Muhammad, added momentum to the protests.

In Pakistan, thousands of people celebrating Eid Milad-un-Nabi poured into streets all over the country. Many cities, including Lahore, Karachi and Multan, saw huge crowds chanting anti-French slogans, holding signs, and furiously stomping on French flags.

In many cities, people also burned effigies of the French president and called on Muslim countries to boycott all French products and cut off diplomatic ties with France.

Addressing a conference, Prime Minister Imran Khan said: “It is the failure of the leadership of Muslim countries who cannot tell the West what sentiments we have for our prophet. I will request all the leaders of Muslim countries to address this from one platform so we can educate the world about Islamophobia.”

Macron’s remarks defending blasphemous cartoons have caused outrage among Muslims worldwide, triggering a campaign to boycott French products. His controversial statement came after a French school teacher was killed by a Chechen-origin teenager for displaying the cartoons in a class on freedom of speech.