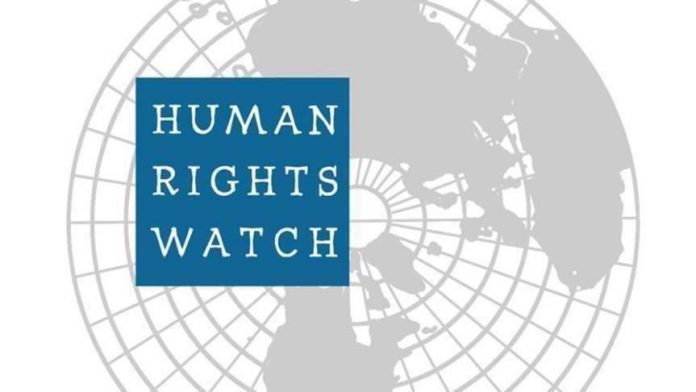 The Human Rights Watch (HRW) on Tuesday urged Ugandan authorities to hold an urgent investigation into claims that a recently arrested opposition lawmaker was tortured in jail.

Francis Zaake was arrested after he distributed food to his electorates in Mityana town. Police say he violated the social distancing guidelines put in place to curb the spread of coronavirus.

“An opposition member of parliament was reportedly tortured after security forces arrested him for distributing food to constituents on April 19, 2020,” the rights group said in a statement.

“Uganda should urgently investigate the claims by witnesses that Francis Zaake was tortured and hold those responsible to account.”

The development came days after, the HRW claimed, Uganda’s President Yoweri Museveni on March 30 “directed the police to arrest politicians who distribute food after he banned public and private transport, suspended non-essential services, and closed non-food markets to prevent the spread of COVID-19. The government said that food donations had to go through a government-organized task force.”

“Police brutality is always prohibited, pandemic or no pandemic,” said Oryem Nyeko, Uganda researcher at HRW was quoted as saying in the statement. “Uganda’s authorities should urgently look into these allegations and hold those responsible to account.

At least three witnesses who saw Zaake told the HRW that he was unable to walk and appeared to have been severely beaten.

Uganda police, however, deny the torture claims, and that the lawmaker is in critical condition.

“He has not been poisoned or had his ribs broken like some people are saying. He is in good condition contrary to reports that he is dead,” New Vision local website quoted Fred Enanga, the police spokesperson, as saying.

“The legislator is in stable condition and is due for discharge.”

Enanga explained that Zaake, who is being nursed at the government medical facility in Naguru, was arrested for disobeying government orders on the pandemic.

The landlocked country in East Africa has thus far registered 79 COVID-19 cases and 52 recoveries, with no virus linked-deaths, according to Johns Hopkins University.

Uganda, according to the World Food Programme (WFP), produces more food than it consumes. Yet, poverty still limits people’s access to nutritious food, especially in the north and east of the country.

A fast-growing population of 39 million, and the presence of the world’s third largest refugee population pose further challenges to the country’s ability to achieve Sustainable Development Goal 2 on Zero Hunger.

Uganda hosts more refugees than any other country in Africa, including people who have fled from South Sudan, the Democratic Republic of Congo and Burundi.

At least 19.7% of the population lives below poverty line, and 29% of children under age 5 are stunted.