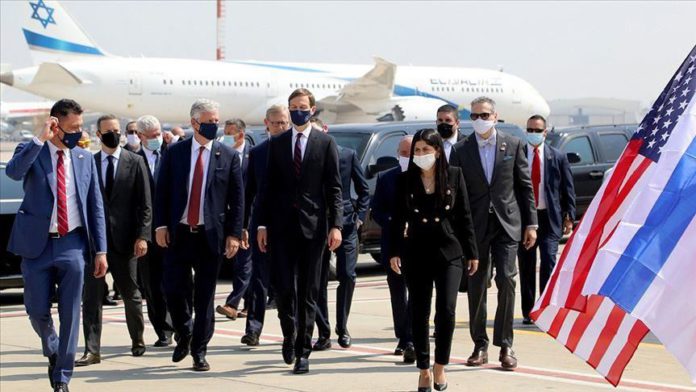 While much of the Arab and international media condemned last month’s United Arab Emirates-Israeli normalization deal, Gulf media praised the agreement and the arrival of an Israeli delegation in the capital Abu Dhabi on Monday.

Several Gulf outlets praised the controversial Israeli commercial flight that carried an Israeli delegation and US diplomats as historic.

Although Egyptian, Bahraini, and Omani media were neutral on the Israeli flight, Saudi media tended to support the UAE’s steps towards normalization.

The Israeli delegation carried by an El Al flight was headed by National Security Adviser Meir Ben-Shabat, while the US diplomats were led by Jared Kushner, US President Donald Trump’s son-in-law and special adviser.

Kushner described the flight as a “historic” one that is being watched by everyone in the Arab and Islamic world.

Meanwhile, UAE-based outlet The National described the flight as “Historic flight from Israel to the UAE [that] brings opportunity for closer ties and co-operation.” The Emirati outlet also hailed the step, saying that “we’re writing the script for the Middle East.”

A headline by London-based Asharq Al-Awsat said: “Optimism about prospects for the UAE-Israeli normalization.”

Despite his positive comments on the deal, Saudi Foreign Minister Prince Faisal bin Farhan Al Saud did not signal the kingdom’s readiness to take a similar step to normalize relations with Israel.

Reiterating Saudi Arabia’s commitment to the Arab peace plan initiated by Riyadh in 2002, Prince Faisal said they set out conditions there for normalizing relations with Israel.

“Peace must be achieved between the Palestinians and Israelis based on the internationally recognized parameters. Once that is achieved, all things are possible,” he said.

While the UAE-Israel deal was welcomed by some countries, it triggered anger and outrage in most majority-Muslim countries.

“With the deal, the UAE seeks instability in the region and betrays the Palestinian cause for its own interests,” Turkish Foreign Minister Mevlut Cavusoglu said.