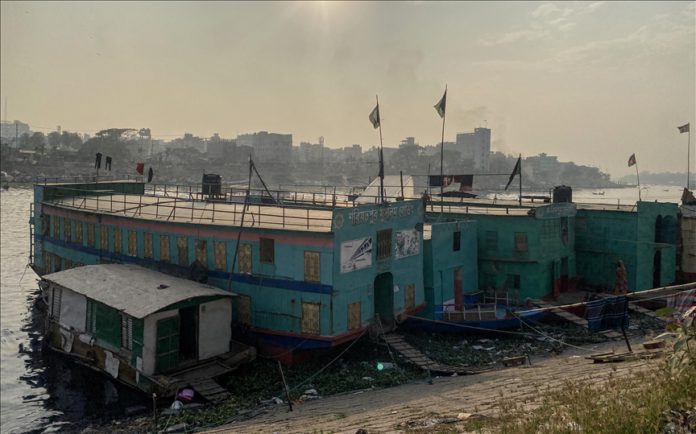 Teenager Badsha and his friend Badal left their homes in the low-income Badamtoli neighborhood of Bangladesh’s central city of Narayanganj for the capital Dhaka to earn a living and support their families that have been struggling for survival due to financial hardship during the ongoing pandemic.

They found work as day laborers in a factory near the Buriganga River Port in Dhaka, and for sleep, they began staying in a houseboat floating hotel, which is the most cost-effective way to save money and then send the monthly savings to their families.

The houseboat hotels, however, are becoming extinct, with only five of them still in operation in Dhaka. Customers of these hotels include low-income people such as small business owners, day laborers, retail vendors, city hawkers, and other workers.

Those who rent a cabin from the hotel are provided with bed sheets, pillows, and winter blankets.

These hotels have been popular for a long time, according to hotel managers that spoke to Anadolu Agency. Their owners and ancestors launched a floating hotel operation in Dhaka Sadarghat on the Buriganga Riverbank under British rule.

Many officers used to come to Dhaka during the British colonial period to stay in these floating hotels and enjoy boats with their families.

However, the situation has deteriorated significantly, with the river becoming polluted and mainly low-income people coming to use the service owing to the unhygienic surroundings, they added.

Md. Mustafa Mia, 50, hails from the south-central Faridpur district and has worked as a hotel boy before taking over as the manager of one of the five houseboats for the past 36 years. He started on the houseboat with a salary of 700 taka (around $8) that has increased to 12,000 taka (about $140) per month.

“After Bangladesh’s independence (in 1971), they got approval from the authority in 1975. The hotels are strictly for single men, and no couples or women are allowed. Our clientele is mostly men who own small businesses and work as day laborers,” he explained.

The port authority has relocated the boathouse from the previous location near the ferry terminal to an isolated riverbank.

“Half of the total seats now go unoccupied each night due to the relocation, while the COVID pandemic appeared as a double blow for our business,” Md Dulal, the duty manager of Shariatpur Muslim Boarding, said.

“We are now struggling for our survival,” he added.

“In the 1970s and 1980s, the river water was fresh, and large crowds visited every day. The Buriganga River, however, has become so polluted that it can no longer be cleansed in any way. So, we were unable to provide a clean environment comparable to that of modern hotels,” Mia said.

Md Julhash, 65, a fruit vendor, has been staying at one of these floating hotels for the past 36 years, while Md Abdul Hai, from south-central Barisal, who has been there for 16 years, also echoed similar views.

On these houseboats, there are no hygienic baths or toilets. Service providers were seen taking baths with pre-stored Buriganga water and using toilets that were directly connected to the river.

According to the hotel managers, the government should “improve the service system by allowing investment or incentives for the floating houseboat hotels, including opening tourism opportunities on the banks of the country’s eye-catching rivers.”

Call for renovation of waterways

Ashfaque Hossain, a history professor at the University of Dhaka, told Anadolu Agency that waterways and water vessels were popular even before the British era because Bangladesh is a riverine country.

“Businesses were centered on major rivers in Bangladesh, and the Buriganga River was one of the region’s business centers. Many of them needed to spend nights here, and many preferred such houseboats, which could also ensure Muslims’ and Hindus’ religious purity,” he said.

The remaining houseboats are the legacy of history, he added, calling for restoring rivers and waterways.

According to a study conducted by the Environment and Social Development Organization, six rivers – the Buriganga, Sitalakhya, Bangshi, Turag, Balu, and Dhaleshawri – that run around Dhaka are now recognized as “biologically dead rivers” due to pollution.

Md. Delwar Hossain, the Inland Water Transport Authority’s director-general of planning, told Anadolu Agency that the government has undertaken a number of projects to restore waterways as a means of transportation throughout the country, including Dhaka.

“We will look into the matter if they (houseboat owners) place any guarantee to upgrade their services,” he said, adding that some projects have already been taken to promote river-based tourism.

ANALYSIS – In Afghanistan, another Great Game set to unfold