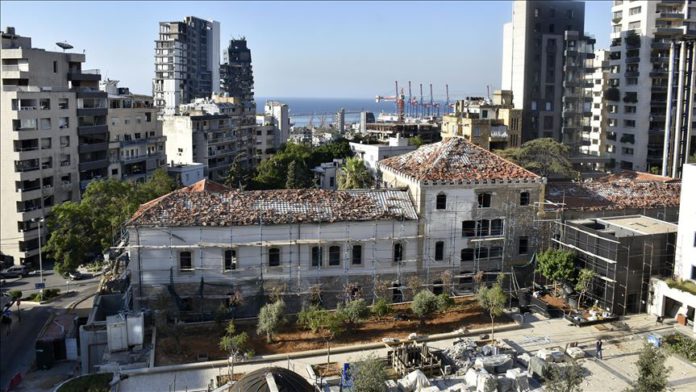 As clean-up operations continue in Beirut after a devastating blast rocked the Lebanese capital earlier this month, the survivors have been visiting the worst affected areas.

On Aug. 4, at least 200 people died and around 6,000 were injured when an explosion in a warehouse filled with neglected stockpile of 2,750 tons of ammonium nitrate ripped through the Port of Beirut. At least 300,000 people were left homeless.

The capital is associated with the mythical bird, the Phoenix, which is consumed by flames but then rises from its ashes, as it has been destroyed and rebuilt many times during its history.

Obviously, it deserves this comparison, especially after having a view of the devastated site.

Nearly every generation in the country has been exposed to some kind of conflict, and the port explosion added another disaster to the nation’s collective psyche.

Although the threshold for the Lebanese to endure pain is quite high, for many, this recent blast is unforgettable.

Now the streets of Beirut are like war zones, with collapsed buildings, shattered roads and broken glasses scattered almost everywhere.

People from all walks of life visit dilapidated places to understand what is going on in the worst-affected areas.

Unfortunately, what they see is not pleasant.

With the impact felt up to 150 miles away, the explosion in the port caused heavy structural damage to historical and religious places.

Visiting the port, which is considered the heart of the city, now must be difficult for them as it looks like a scene from a horror movie.

One can easily become heartbroken when traveling through the city, with homes, businesses, hospitals and full city blocks now almost demolished.

Walking along the port, you see the sadness reflected on people’s faces, trying to comprehend the dimension of the disaster while examining the remains of historical places.

“Whom we blame for this disaster, whom we should put in question, there is no answer,” said Rama Saleh, the owner of a mini market in the Hamra district, expressing her anger against the authorities.

Quite justified for being angry, residents of Beirut, from the youngest to the oldest, share Rama’s view, wanting to know who is to be held responsible for this horrific incident.

According to them, “all politicians are corrupt and backed by their followers and the international community, and they see no hope for their future.”

Amid the many unknowns about the blast, what is observed from the Lebanese is that they demand, at least for now, to be safe, not to be killed in any incident like this.