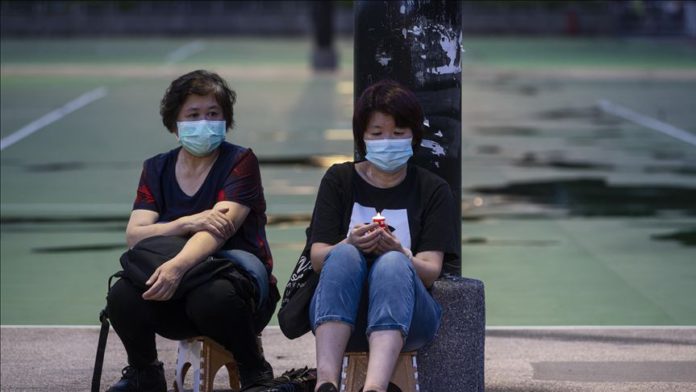 At least 133 infections were reported, bringing the total to 2,132, daily South China Morning Post reported, in a second day that saw coronavirus cases rise by over 110.

Fourteen people have died due to infection in the region.

The use of masks has been made mandatory in public, as local authorities plan to extend measures against the virus’s spread.

A statement by China’s national health commission said 22 more cases had been found in the country.

At least 18 of the total cases were from the Xinjiang Uighur autonomous region.

The total number of COVID-19 cases in Xinjiang, home to the ethnic Uighur community, has risen to 81.

China has reported 83,729 cases, so far since the outbreak of the virus last December. At least 4,634 people have died due to the infection.

Climbing above the previous peak of 293 last Friday, this was the first time Japan’s capital had seen such high figures, Kyodo news agency reported.

Coronavirus cases have been on the rise since last May in several Japanese cities.

The surge in cases prompted Tokyo Governor Yuriko Koike to urge residents to stay at home during an upcoming four-day weekend holiday.

The country has confirmed 27,139 coronavirus cases, including nearly 10,300 in Tokyo. The virus has caused 990 deaths.

The government recently allowed foreign residents to re-enter the country.

Since first appearing in China last December, the virus has spread to at least 188 countries and regions. The US, Brazil, India, and Russia are currently the countries hardest hit.

The pandemic has killed more than 623,000 worldwide, with an excess of 15.2 million confirmed cases, according to figures compiled by US-based Johns Hopkins University.

The number of recoveries across the globe has surpassed 8.6 million.