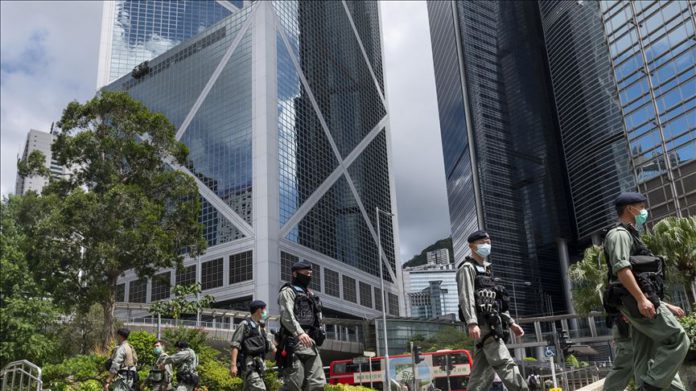 Billionaire Apple Daily tabloid founder Lai, his two sons, and seven others, including journalists and activists, were accused of “foreign collusion.”

The arrests of the media tycoon and others drew a sharp reaction from the West, which linked the move with a controversial national security law implemented in the semi-autonomous region last month.

The White House said it was “deeply troubled” by Jimmy’s arrest.

Rebuffing critics who called the Daily Apple raid the “darkest day for the press,” a Hong Kong police statement said: “With respect for press freedom, Hong Kong Police facilitated reporting work at [raid] scene and made a pilot arrangement to allow 15 media organizations to enter the cordoned area to conduct live coverage for higher transparency.”

“Accompanied by the staff, investigators were mindful of avoiding journalistic materials. It’s an open and transparent process being live streamed to the world. Regardless of one’s background, we’re duty-bound to enforce the law. Offenders are to be brought to justice,” said the police.

According to Chinese state-run daily Global Times, Hong Kong police are seeking “more time to investigate and analyze the case before bringing charges in line with legal procedures.”

Granting Lai bail “does not mean he is free… Given the large amount of evidence seized by Hong Kong police, law enforcement authorities need time to analyze it before laying charges,” the daily said, quoting sources.

It claimed Lai was “reportedly in a rush to dispose of properties he owns in Hong Kong.”

The police action came about a month after China implemented its national security law in the semi-autonomous region.

The law criminalizes anti-China sentiments in the region, which continued to serve as a vibrant economic hub after the UK handed it over to Beijing in 1997 under a vow that it would enjoy a “high level of autonomy” for 50 years.

The US has also imposed sanctions on Hong Kong Chief Executive Carrie Lam and her colleagues for “undermining the autonomy of Hong Kong.”