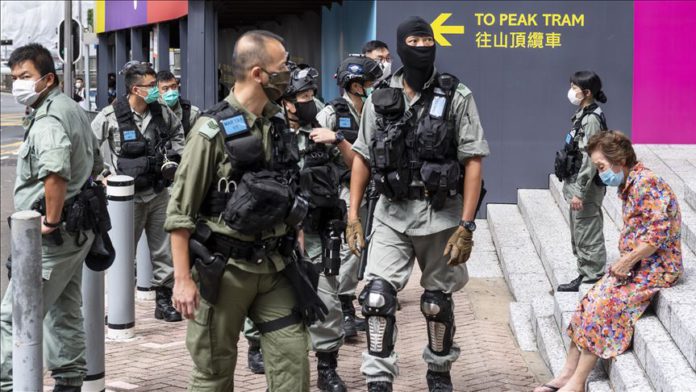 The city government on Monday announced how it would implement article 43 of the security legislation, which allows the police commissioner to ask electronic platforms to remove or block content that ostensibly pose a national security risk, reported Radio Television Hong Kong.

It also authorized officials to demand information from political organizations of a foreign country or based outside the mainland, Hong Kong and Macau — or an agent of such an organization — could be asked to provide information on itself, its activities or its employees.

If an organization or individual is unable to comply with authorities’ requests immediately, the law allows police to seize their equipment with a magistrate’s warrant, or search their premises without a permit.

However, secret surveillance or intercepting communications would require approval from the chief executive.

Further, if individuals do not obey police directives, they can face fines of up to 100,000 Hong Kong dollars ($12,900) and jail sentences of one year, while service providers can face the same fine with six months in prison.

Charles Mok, IT sector lawmaker of Hong Kong, warned that the new police powers could prompt international firms to consider pulling out of Hong Kong.

“It is deeply worrying that these companies may have to reassess the risk of doing business in Hong Kong, and — similar to some of these companies decision previously to exit from the Chinese mainland market — will they have to make that kind of decision for Hong Kong?” the local media quoted Mok as saying in a news conference.

However, Chief Executive Carrie Lam dismissed the concerns on the new security law and said it would restore Hong Kong’s status as the safest city in the world.

“I would submit that instead of undermining people’s freedoms, the national security law will restore stability and helps ensure the great majority of Hong Kong people could exercise their rights and freedoms without being intimidated and attacked,” she said.

On June 30, the new legislation for Hong Kong was unanimously passed by China’s National People’s Congress and then signed into law by President Xi Jinping.

Ethiopia: Talks on Nile dam must focus on filling