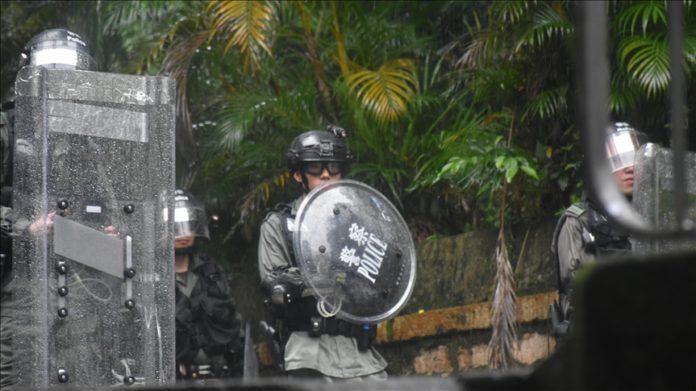 A court in Hong Kong on Friday sentenced the semi-autonomous region’s incarcerated media tycoon to one year in prison over 2019 anti-government demonstrations, according to local media.

Jimmy Lai, the popular media entrepreneur and founder of Apple Daily, was brought to West Kowloon Court to hear the verdict in the case over his alleged role in an “unauthorized assembly that took place during 2019’s anti-government protests,” daily South China Morning Post reported.

Seven former Hong Kong lawmakers were also sentenced, including Democratic Party founding chairman Martin Lee Chu-ming who was given a suspended 11-month sentence for taking part in the same demonstrations in Victoria Park, attended by some 300,000 people on Aug. 18, 2019.

The court convicted seven others for eight to 18 months in prison, including three suspended jail terms.

Lai has been in jail since last year after charges under the controversial national security law were brought against him in a separate case. The law was imposed in the region last July, drawing widespread criticism.

Jimmy was arrested last August during a police raid accusing him of “foreign collision”, while Apple Daily — a declared “pro-democracy” outlet — office premises were simultaneously raided by Hong Kong police. However, Friday’s ruling is his first ever criminal conviction.

“I plead guilty but I haven’t done anything wrong. History will absolve me,” Lee had told the court where video recording of his participation was played.

Video footage showing Lai, Lee, and Yeung attending the rally in Wan Chai, as well as a subsequent demonstration, was played in the court.

A proposal to legalize the extradition of criminals from Hong Kong to mainland China was shelved after it sparked widespread protests in 2019 in the enclave, which is one of the world’s busiest trade hubs.