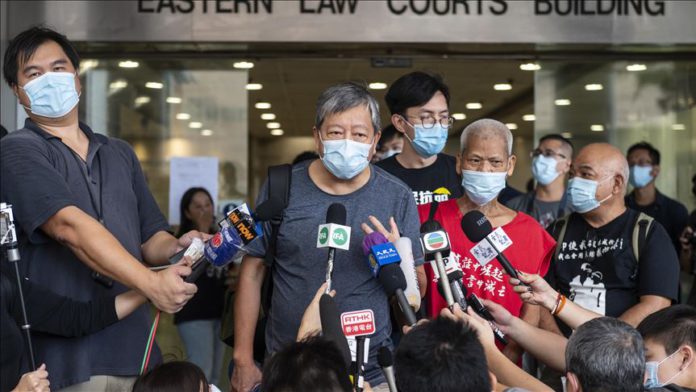 China has charged 12 Hong Kong activists caught last month while allegedly trying to flee to Taiwan, amid continuing tensions in the semi-autonomous city.

The activists were caught last month but were formally arrested after charges were leveled against them on Wednesday, the Hong Kong Free Press news website reported.

Authorities brought the charges on the eve of China’s National Day, when strict security measures are put in place in the region amid fears of protests.

The activists left the coast of Hong Kong on Aug. 23 and had just made it some 43 miles southeast of the city when they were caught.

They were handed over to police in Shenzhen, a Chinese mainland city bordering Hong Kong.

Officials did not provide much information on the arrests until formally pressing charges for making illegal border crossing, according to the suspects’ families and lawyers.

Two of the arrested activists were charged on suspicions of helping the others “escape” Hong Kong.

Since anti-government protests erupted in Hong Kong last year, many people have fled to Taiwan for safety.

However, the number of Hong Kongers fleeing to the island nation increased after Beijing implemented a national security law in Hong Kong this July. The new law criminalizes any act of secession, subversion, terrorism and collusion with foreign forces.

Taiwan’s National Immigration Agency statistics show that the number of people from Hong Kong seeking residency in the island nation rose to 892 in July — the highest all year.

Over 4,775 Hong Kongers have filed for residency in Taiwan this year by the end of July.

Police said the protestors “may have breached national security law.”

China is celebrating its national day to commemorate the founding of the People’s Republic of China in 1949 on Oct. 1.

Authorities in the semi-autonomous region barred a rally slate for Wednesday, citing the novel coronavirus pandemic.

However, the organizer, the Civil Human Rights Front, had called on people to wear black on the day to show solidarity with the 12 detained activists.

The security law has invited sharp criticism to China and local authorities in Hong Kong from western countries, many of whom suspended extradition and trade agreements with the city.

Hong Kong Chief Executive Carrie Lam brushed aside the criticism, vowing “to be fearless in facing down hostile foreign governments.”

She added that Hong Kong “must rely on Beijing’s strong backing in its recovery from the devastating economic impact of the coronavirus,” according to the daily South China Morning Post.

“The national security law, and the anti-government protests last year, showed a safe and stable society was a prerequisite for satisfying people’s aspirations for better lives, and democracy. If we are to keep Hong Kong moving forward … [we must] correctly understand the relationship between one country and two systems, and act in accordance with the constitution and the Basic Law,” she said, addressing an official reception commemorating the national day.