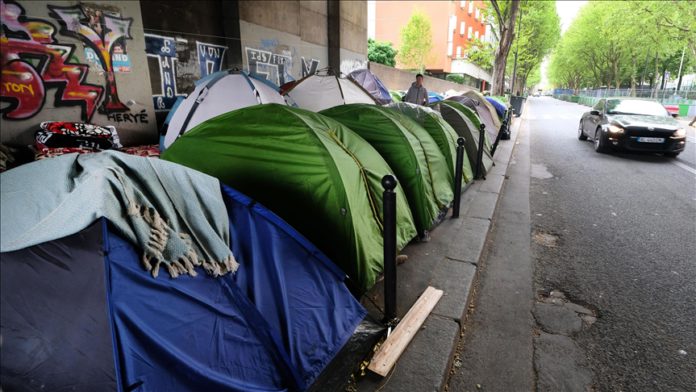 More than 300 homeless refugees have pitched tents in front of City Hall in Paris as they seek a solution for housing accommodations from authorities.

Families with children, single women and unaccompanied minors were among undocumented migrants and refugees forced to live on the streets who set up a camp in front of the building.

Hitting the road for a better life with his wife, Mehtap, two years ago, Ali from Afghanistan told Anadolu Agency that the couple came to France via Iran, Turkey, Greece and Italy.

After their application for residences was rejected in Turkey, the couple illegally crossed into Greece where authorities told them that they could make an appointment for residence in 2024.

“We faced a lot of difficulties in Greece. We couldn’t stand it and went to Italy with my wife and then we came to France,” said Ali.

“Here you see us in France. We are left all by ourselves,” he said as he highlighted their plight ​on the streets.

“We were living in filth, living in makeshift tents. Since we came here, we have been staying in tents for almost 10 days. It is the duty of the state to provide shelter to these people,” said Mehtap.

“It is the state’s duty to provide shelter to these people who are left around, but the state is not doing its duty. Many people apply to us for help, but our means are also limited,” he said.

Although they asked for help several times, the group did not get a response from the government nor the municipality, he said.

Security forces have not yet intervened with immigrants and that is pleasing, Marcellus stressed.

TIMMY Association’s head Esperance Minart said, in Paris, unaccompanied minors are interviewed shortly after arrival and seven out of 10 are rejected and abandoned to the streets.

They expect the related units to protect and integrate them as required by their responsibilities, said Minart.

As with the presumption of innocence, these children should be considered “vulnerable children” and should be enrolled in school like their peers, unless there is evidence showing that they are of age, she stressed.

She demanded that the government act responsibly. “We are not talking about millions of people here, we have the means to do everything right,” she said. “So let’s stop getting in the way of these young people, they will come anyway and they have no family. We have to integrate them [into society], they are already integrating quickly and beautifully. Unfortunately, we do the work that the governorships should do, voluntarily.”

Paris police cleared a migrant camp on Nov. 24, 2020, set up on the Place de la Republique in the center of the capital.

Several hundred tents were removed from the pavement, some with people still in them, as law enforcement sought to evacuate 500 people who set up just an hour before the operation.

Police used teargas and dispersed grenades to move migrants from the area.

The Place de la Republique is a large square located on the border between the 3rd, 10th, and 11th arrondissements in Paris.