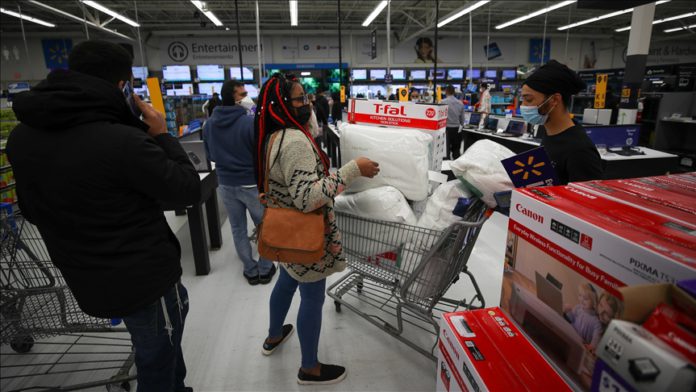 Black Friday, the day after the Thanksgiving holiday, has long served as America’s traditional start to holiday shopping in the lead-up to Christmas.

But the frantic dash to stores is sobered this year by death; the one-day coronavirus death count in America was 2,216 on Tuesday, the highest single-day count since June. And, health experts are worried the nation might yet see a one-day death count that exceeds the current high-mark: 2,752 deaths, reached April 15.

For shoppers, it means a change in what they are buying.

“Things to keep ourselves occupied in the house, since we’re never leaving,” jokes Camille Kerr, shopping in Toys Et Cetera.

“We’re definitely buying more Lego sets and puzzles than we would have otherwise,” she says, her young son underfoot.

“I’m not looking for anything glitzy,” says Crystal Wiley, as she walks past beaded gowns at Chicago’s Bronzeville Boutique. “I mean typically, you want to have sparkly types of items because of the holidays, but [this year] there are no events.”

The pandemic and economic downturn are also changing how much shoppers will spend.

“We’ll spend a little less this year than in other years,” says Kerr.

Adding to retailers’ stress: this month, the state of Illinois and the city of Chicago instituted tighter COVID-19-related restrictions. Some businesses, such as museums and casinos, have been closed, and most others hit with new capacity limits. And there’s a new stay-at-home advisory, just enough to possibly depress shopping turn-out.

“I try to limit how much I go into the stores,” says Vukica Srajaer, as she waits to pick up her pre-ordered gifts at Toys Et Cetera.

Says Stanek, “I think what’s gonna happen is, we’re not going to get, in December, the big mad rush we’re used to having.”

Chicago’s bigger department stores have a better chance of survival, but even they are feeling the pinch.

Workers at the Macy’s flagship store — long a destination of downtown Chicago shopping — say foot traffic is down considerably. The downtown business crowd that would normally stop in after work, has gone back to working from home.

And most shoppers agree they will be doing more online shopping. Data research firm Adobe Analytics predicts $189 billion in US online sales this year, which it says will “shatter” all previous records, and represents a 33% increase over 2019.

It is forced Stanek to step up her online presence at the toy store.

“Yesterday, all we were doing was pulling web orders and on-line orders and (phone) call orders,” she says. “It was becoming overwhelming.”

“While we learned how to do remote retail, we’re much better at face-to-face, and face-to-face is much easier, too!”

William Salaam is feeling the pressure even more in his south-side Chicago clothing store, Bronzeville Boutique. On the same day we talked, just down the street, neighborhood residents lined up around the block of a church, waiting for donated food. They are the neighbors who could be, should be, his customers.

“It’s a struggle,” he admits. “But you can’t just close the door, because the next sale might be the one that makes your day.”

And forget about Black Friday; Salaam is discounting pretty much everything, all month long.

He, too, is getting a not-so-easy crash course in on-line sales and advertising, which adds to his expenses.

But he is not bitter about the new restrictions. Chicago Mayor Lori Lightfoot imposed some of the restrictions, but Salaam happily points to a photo on his cell phone of Lightfoot’s visit to his store last week, and he talks about a sobering phone call.

“I got a message on my phone today that a friend of mine’s wife passed — COVID. There’s some real-life consequences and we have to protect ourselves,” he said.

A patchwork of restrictions

But across the country, restrictions on public movement vary, state-to-state.

Across the border in Wisconsin, there is an on-going political battle between the Republican-led legislature and the Democratic governor, and there are virtually no restrictions.

The governor’s orders on capacity limits and a lock-down mandate were both tossed out by Republicans, and the governor has referred to the state as “the wild west.” Republicans are still in court, trying to get the state’s mask mandate tossed, as well.

But shop owners are not necessarily celebrating.

Admitting that she cleans her “Orange Thread” boutique clothing store “obsessively,” Kristyn Bartlett of Racine is still following all the COVID-19 guidelines.

“It’s going to be slow, but I’m trying different avenues, just making sure people wear masks and there’s hand sanitizer throughout the store.”

And just because it is assumed everyone will always need haircuts, does not ease the concern at nearby Partners in Design salon.

“I’m real happy when I DON’T lose 500 dollars a week,” says owner Frank Fani. The salon received a $50,000 forgiveness payment in the government’s stimulus plan last spring, during the shut-down.

Fani, too, follows his guidelines: the chairs are sterilized after every use and customers get temperature checks at the door. He also put more separation between styling chairs, which means fewer haircuts at any one time — even though his overhead expenses and taxes remain the same.

But Fani, as with other shop owners and shoppers alike, are just pinning their hopes on a vaccine and a quick end to the pandemic.