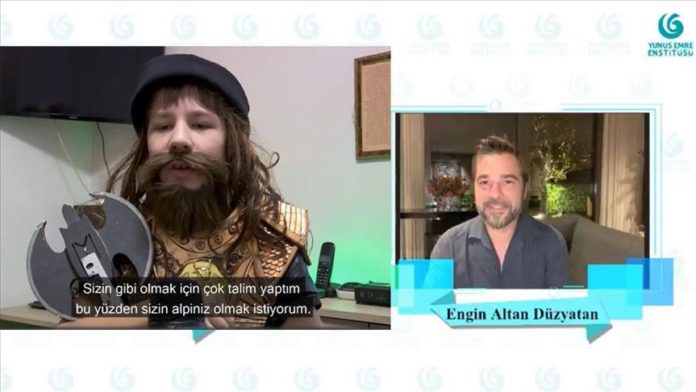 Lead actor of the hit Turkish drama Resurrection: Ertugrul, Engin Altan Duzyatan, has met fans from all over the world through an online event organized by the country’s Yunus Emre Institute.

Seref Ates, the head of Yunus Emre Institute, hosted the event, which aimed at bringing together fans from all over the world and the lead actor of the beloved series.

The event was simultaneously translated from Turkish to seven languages, including Arabic, Bosnian, English, Spanish, and Russian, and was viewed by over 170,000 fans.

Resurrection: Ertugrul is a TV series which sheds light on Turkish history, and is currently broadcast in more than 70 countries.

‘I learned a lot from Resurrection: Ertugrul’

Duzyatan said he has been acting for 25 years, but Resurrection: Ertugrul is one of the most important roles he has ever acted.

“Just like all of the characters I have played, I have learned a lot from Ertugrul Gazi [father of the Ottoman Empire’s first leader, and Duzyatan’s character]. His personality, his outlook on justice, humanity affected me to a great extent,” he said.

Duzyatan said emotions, feelings has no language, no matter where in the world they are experienced. “By building intercultural bonds, we can bring people from different backgrounds together, to share something on a mutual ground,” he added.

Fans from all around the world had the chance to ask questions to Duzyatan during the online event.

A student of Yunus Emre Institute in Cairo, Egypt, expressed her gratitude to the TV show, and to Duzyatan himself, for acting the character so beautifully and awakening Muslims’ feelings all around the world to be connected to one another.

Another viewer from Bosnia and Herzegovina, a little fan named Bunyamin Prasovic, told Duzyatan: “I have tried so much to be like you, I would like to be your soldier,” wearing traditional gears that Ertugrul Gazi and his soldiers wear in the TV show.

Turkey’s state-run Yunus Emre Institute works to promote Turkish language, history, and culture, and has been teaching Turkish in collaboration with more than 40 cultural centers around the world.