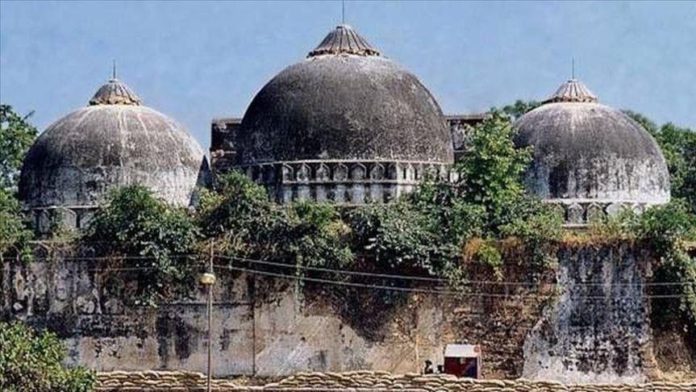 A campaign by the Hindu right-wing groups to claim Mughal era monuments and historic mosques has raised a wave of concern among minorities, historians, and archaeologists across India.

Recently a functionary of India’s ruling Bharatiya Janata Party (BJP) Rajneesh Singh approached a court requesting a directive to the Archaeological Survey of India (ASI) to open 22 rooms inside the world famous UNESCO heritage monument Taj Mahal to ascertain if the claims that the mausoleum houses Hindu idols were true.

Built in the city of Agra, 240 kilometers (149 miles) south of the capital New Delhi, by order of the Mughal emperor Shah Jahan in 1648 in memory of his favorite wife, the monument is considered the jewel of Muslim art in India.

The court, however, dismissed the petition. Singh’s plea was based on a conspiracy theory supported by right-wing historians, that the 17th-century marvel was an old Hindu temple called “Tejo Mahal.”

They even claimed that a court-appointed team in a survey has found relics of the Hindu god Shiva inside the pond in the courtyard of the mosque meant for ablutions before the prayers.

The Muslim groups had opposed the survey, saying it was against the Places of Worship Act of 1991, which maintains the religious status of any place of worship as of Aug. 15, 1947.

The lower court had ordered the sealing of the mosque. The Supreme Court, however, allowed Muslims to pray at the mosque while ordering protection of the area, where the alleged Shiva relic was found.

In another case in the same state, a court entertained a lawsuit seeking ownership of the land of 17th century Shahi Idgah Masjid in Mathura, 57 km (35 mi) north of Agra city. The mosque is adjacent to a temple, where Hindus believe that the deity Lord Krishna was born.

“This greatly helps the governing party deflect from real issues of inflation, price rise, and rising unemployment. Thus, it is like killing two birds with one stone,” he said.

Sahoo said such controversies create religious polarization, which helps the ruling party shift the goal post from the Ayodhya-Babri Mosque episode. Babri Mosque built by Mughal Emperor Babur in the 16th century was demolished by a frenzied mob in 1992 as they believed it was the birthplace of the Hindu deity Rama.

After a protracted legal battle, five judges from Supreme Court bench 2019, who heard the title dispute handed over the land to the Hindu party to build the Hindu temple. It also ordered the government to give an alternative five-acre plot to the Muslims to construct the mosque.

Political analysts in India link BJP’s rise in India’s political landscape to the movement to build the grand Ram Tempe at the place of Babri Mosque in the city of Ayodhya.

Sahoo said that the main motive behind raking up such issues is to “reopen the historical wounds and keep the communal pot boiling” for the vote bank.

“The BJP’s rise from mere two seats in Lok Sabha (lower house of parliament) in 1984 to 120 seats in 1996 was facilitated by religious polarization on the back of the Ayodhya movement,” he said.

Raking up another controversy, another Hindu radical outfit claimed that Qutb Minar, a famous minaret built in the early 13th century by Turk ruler Qutbudin Aibak, was a Vishnu Temple. The minaret is a part of the larger Qutb complex, a UNESCO World Heritage Site in the south of the capital city of Delhi.

Vinod Bansal, spokesperson for the hardline Hindu organization Vishwa Hindu Parishad claimed that the structure was built with materials obtained after demolishing 27 Hindu-Jain temples, and that had been done to “tease” the Hindu community.

Renowned historian Syed Ali Nadeem Rezavi, an expert on Mughal history, said these controversies have been going from a long time now.

“I believe not only since the year 2014 when Prime Minister Modi came into power, but it was long back in 1992, the first vandalism was done (Babri demolition),” he said.

“What has happened over the last few years that now attempts are being made to do away this discipline of history and replace it with mythology. No one is paying attention to the available historical facts. They are not being considered,” he said.

He said that courts shouldn’t have admitted cases regarding temples at Varanasi.

“The 1991 Act assured us that it won’t be repeated, but now lower, the higher court admitted cases regarding temples at Varanasi. They have overlooked the act which was made by the Indian government. The court should not have entertained such pleas,” he said.

“There is no need for any new rules. If they (the government) follow the constitution of the country, nothing would have happened. 70 years, we survived as a nation and we were quite proud,” he added.

Zafar Ul Islam Khan, a Muslim leader and former chief of the Delhi Minorities Commission, told Anadolu Agency that attention has been turned to historic mosques with an eye on the next general elections scheduled in 2024.

“The current onslaught on mosques in many parts of the country is part of an old Hindutva agenda. Now that they have secured Babri and a grand temple is being built there, they have turned their attention to some other mosques to grab them before the next general elections in 2024,” he said.

He added that all developments are taking place in blatant violation of earlier law.

“Since the 1991 law protecting mosques, with the exception of Babri, at their status as prevailed at the time of independence in 1947, is still on the statute though they may abrogate it using their brute majority in Parliament,” he said.

Niyaz Farooqui, secretary of Jamiat Ulama-i-Hind, India’s largest socio-religious Muslim organization, blamed the communal forces for trying to divide the Hindus and Muslims in the country.

“They are trying to spread the hatred of the country,” he said, adding that whatsoever controversies are happening, there should be a solution to it.

All India Muslim Personal Law Board, an umbrella body of scholars in India, after a meeting earlier this week said Muslims cannot tolerate the desecration of mosques and that “sectarian forces are hell-bent on lawlessness and courts are also disappointing the oppressed.”

Experts say the only solution to the ongoing developments is government at the federal level that follows the rules and regulations.

Indian Muslim leader and member of parliament, Asaduddin Owaisi, said it is high time that Prime Minister Narendra Modi “puts an end to all this” and respects the 1991 law, which prohibits a change in the status quo of religious places as it existed at the time of India’s independence on Aug. 15, 1947.