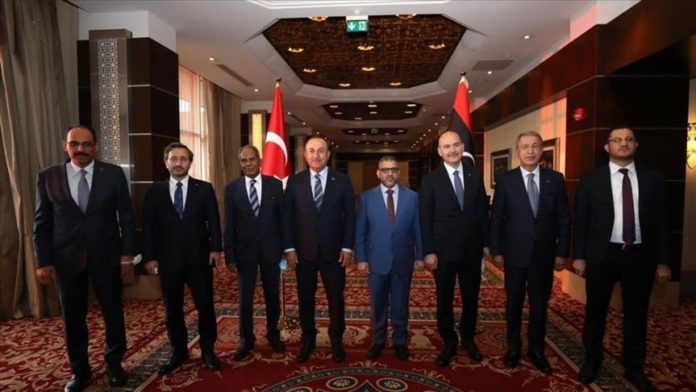 A high-level delegation from Turkey visited Libya on Saturday upon the instructions of Turkish President Recep Tayyip Erdogan ahead of Monday’s NATO summit.

The group met President Halid al-Mashri of the High Council of State, President al-Manfi, members of the Presidential Council of Libya, Minister of State for Communications and Political Affairs Ammar Al-Lafi and Prime Minister Abdul Hamid Dbeibah of the Government of National Unity (GNU), Cavusoglu said on Twitter

“Emphasized to President Halid al-Mashri of the High Council of State our commitment to the Libyan-led and Libyan-owned political process,” he said.

Cavusoglu said Turkey “will increase support to Libya in every field” and that the delegation “emphasized our support to national reconciliation efforts.”

In a separate tweet, he said, the group emphasized Turkey’s support to the GNU ahead of the Berlin II Conference in their meeting with Dbeibah. “Will continue to cooperate for secure, stable and prosperous Libya,” he said.

Cavusoglu also met his Libyan counterpart, Najla Mangoush, and said they will meet again at the Antalya Diplomacy Forum later this month.

Altun said Turkish and Libyan officials had significant talks for the unity, peace and tranquility of Libya.

He had a one-on-one with Al-Lafi, to deepen cooperation between the two countries in media communication.

A top-level meeting of NATO member states will be held Monday in Brussels.

Libya’s civil war, which continued since the ouster and killing of strongman Muammar al-Qaddafi in 2011, was exacerbated in 2019 when warlord Khalifa Haftar carried out a military onslaught to topple the Tripoli-based internationally recognized government for control of the North African country.