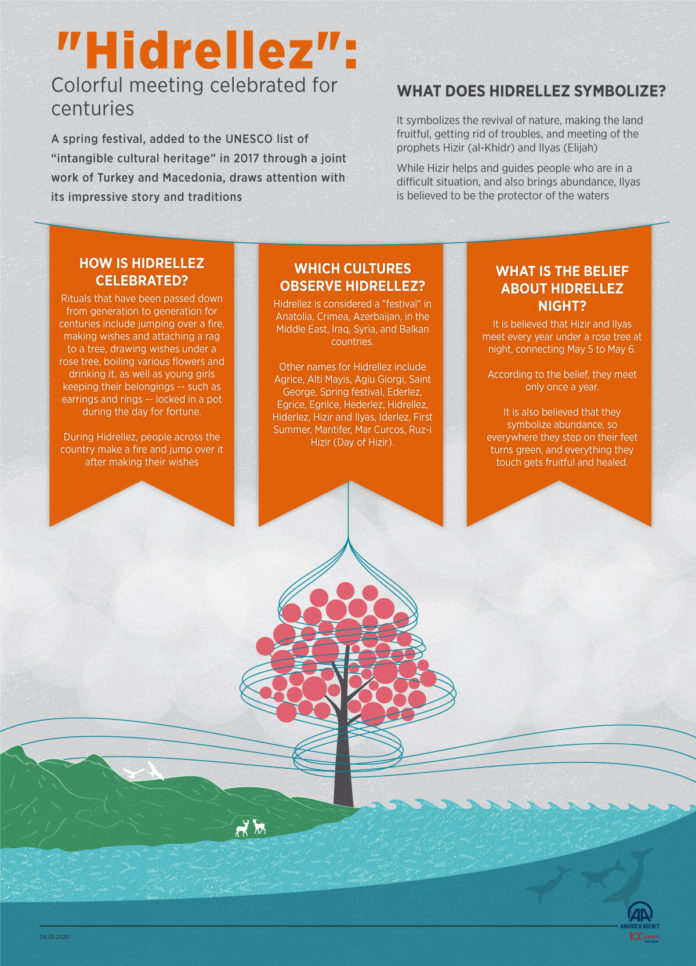 This year, the novel coronavirus forced the cancellation of normally well-attended events of Hidrellez, a traditional festival observed in several countries every year on May 6.

The tradition of Hidrellez, seen in Anatolia as the day when the prophets Hizir (al-Khidr) and Ilyas (Elijah) meet on earth, has been passed down from generation to generation for centuries.

Turkish communities around the world celebrate Hidrellez with joy, but, this year in an effort to prevent the virus’ spread, events and festivals such as Nevruz and St. Patrick’s Day were canceled, rescheduled, or modified.

Due to the pandemic, restaurants, cafes, and schools are closed, millions of people have lost their jobs, and hospitals are full of people battling coronavirus worldwide, which has made it much harder for people to be the mood for celebrations.

Globally, there are over 3.66 million confirmed cases of coronavirus, with the death toll surpassing 257,000.

Hidrellez, a combination of names Hizir and Ilyas, is celebrated as a spring festival in Anatolia, Crimea and Azerbaijan, as well as in the Middle East and Balkan countries.

According to Turkey’s Culture and Tourism Ministry, there is a variety of beliefs about the roots of the tradition of Hizir and Hidrellez.

Some believe that they derive from Mesopotamian and Anatolian cultures, while others argue that they are a part of pre-Islamic Central Asian Turkish culture and beliefs. After all, it is not possible to attribute the Hidrellez festival and beliefs about Hizir to a single culture.

Hidrellez Day is May 6 in the Gregorian calendar, while April 23 in the Julian calendar, as known the Rumi calendar too.

So May 6, representing the end of winter and start of summer, is a reason to celebrate, the ministry said.

It is believed that Hizir and Ilyas meet on earth only once every year. While Hizir helps and guides people who are in a difficult situation, and also brings abundance, Ilyas is believed to be the protector of the waters.

It is also believed that they symbolize abundance, so everywhere they step on their feet turns green, and everything they touch gets fruitful and healed.

Celebrations are held in green, wooded places and near sources of water as well as near a tomb or shrine.

In the evening of the day before Hidrellez, people write or draw their wishes — such as a home, car or child — on a paper and attach it to a branch of a rose tree or bury it under the tree, while some throw it to a sea or a river. Some also bury money under a rose tree for abundance.

Meanwhile, it is considered that eating the first lamb of spring leads to health and recovery. Another belief is boiling flowers or plants and drinking the water to heal diseases, and that the water makes people rejuvenate and beautiful if they wash themselves with it for 40 days.

According to UNESCO, “the rituals have deep-rooted cultural meanings and provide the community with a sense of belonging and cultural identity and an opportunity to strengthen relations.”

This spring festival was added to the UNESCO’s list of “intangible cultural heritage” in 2017.

Hidrellez is one of the seasonal festivals in the Turkish world.

Dr. Alimcan Inayet, an expert at Ege University Institute of Turkish World Studies, told Anadolu Agency that some customs of the pre-Islamic period are also seen in celebrations of Hidrellez, which shows that this tradition has existed among the Turks for a long time.

Practices preceding Hidrellez celebrations, including cleaning, changing clothes, and the ones during the festival such as setting up tables, eating, burning fire and jumping over it, visiting tombs, abundance prayers, and making wishes all resemble pre-Islamic practices, added Inayet.

“Hidrellez is one of the shared values of the Turkish world, Middle East and Balkans. It is very important to protect, keep alive and enrich this tradition,” he noted.